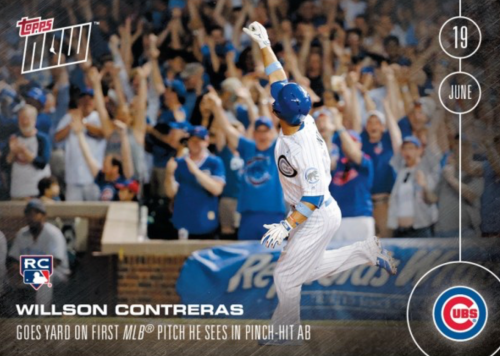 With the first pitch he saw as a big-leaguer, Willson Contreras delivered and that might spark more future deliveries for collectors as he’s not got that much cardboard just yet unlike all of those other young Chicago Cubs stars.

His first pitch resulted in a pinch-hit two-run homer — and that’s resulted in his first MLB Rookie Card, a Topps Now card available right now and only for the next 20-plus hours.

The 24-year-old rookie appears on fewer than 80 total cards and fewer than 30 of those are autographs — that’s a very low number these days. His first Bowman Chrome cards — and his first Chrome autos — can be found in 2016 Bowman. His only other autos can be found in 2015 Elite Extra Edition from Panini America.

Through 54 games at Triple-A Iowa this year, the catcher from Venezuela was hitting .350 with nine homers and 43 RBI. He also had 16 doubles and three triples before his call-up. His next autographs are set to arrive in 2016 Bowman Inception, which arrives on July 7 and he’ll now be eligible to appear in any Topps products as an RC logo card the rest of this year, not just Bowman brands as a prospect.