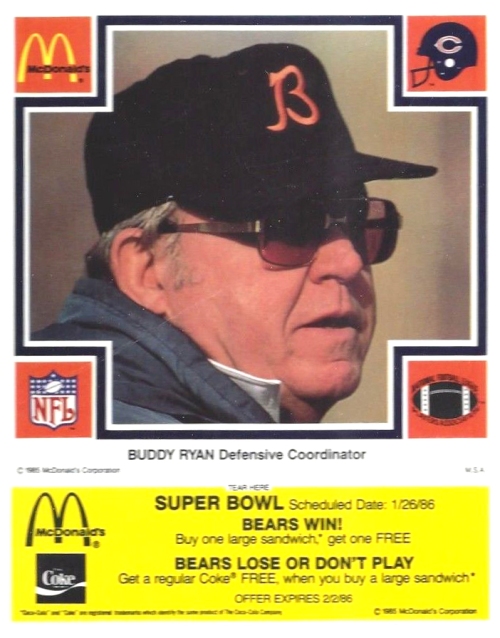 He was a coach for two of the greatest teams in NFL history, a defensive mastermind and a coach that his players revered.

He’s Buddy Ryan, a 26-year veteran of the coaching ranks and an innovator in the game. He was a young defensive coach for the New York Jets that won Super Bowl III. He was the brains behind the 46 defense and the dominating Chicago Bears that steamrolled their way to a victory in Super Bowl XX.

“Buddy was such an integral part of the Chicago Bears and the ’85 Bears, it was unbelievable,” former Bears coach Mike Ditka told NFL.com. “There’s no way we win anything without that defense, without his coaching and I think everybody understands that. We won because of our defense, we can never forget that. That’s just the way it was.”

He died on Tuesday at age 82 — and he’s also a legend you won’t find often on cardboard. 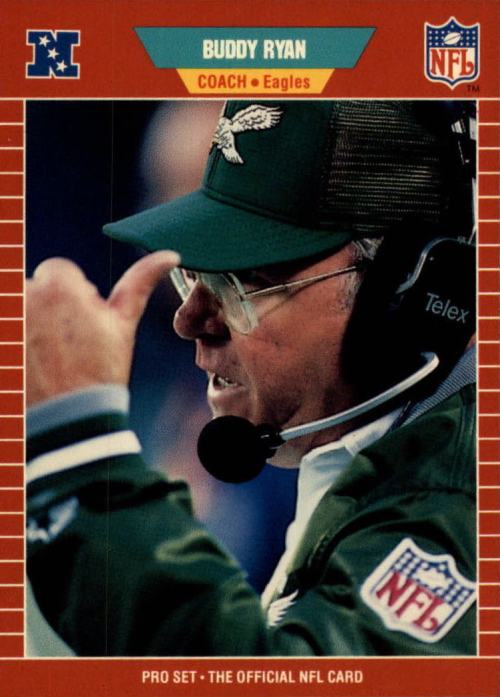 Ryan’s first widely distributed football cards came with the 1985 McDonald’s food issue (top), a card showing him during his time as the defensive coordinator for the Bears where his card could be found with three different colored tabs — Blue, Yellow and Orange. His only other trading card appearances around that time come his time as coach of the Philadelphia Eagles — the first in Eagles police sets.

His only traditional football cards — ones found in packs — came from Pro Set in 1989 (above) and 1990. That’s it. He never signed a certified autograph. Not one of his old jackets or polo shirts ever got unearthed and cut up for a memorabilia card.

His twin sons, Rex and Rob, are coaches for the Buffalo Bills, furthering his football legacy even more. (And, interestingly, neither one of them have appeared on any standard football cards, despite pretty high profiles among the coaching ranks.)

“Buddy was a legend in our league in so many ways,” the Bills said a statement. “His defenses were innovative and he was a master at putting his talented and tough players in a position to succeed. He was a real game-changer and much of his philosophies and defensive tactics are still utilized effectively by teams today. Buddy’s influence will be carried on by defensive coaches for generations to come, but none more so than by Rex and Rob. Our heartfelt thoughts and prayers are with the Ryan family today.”