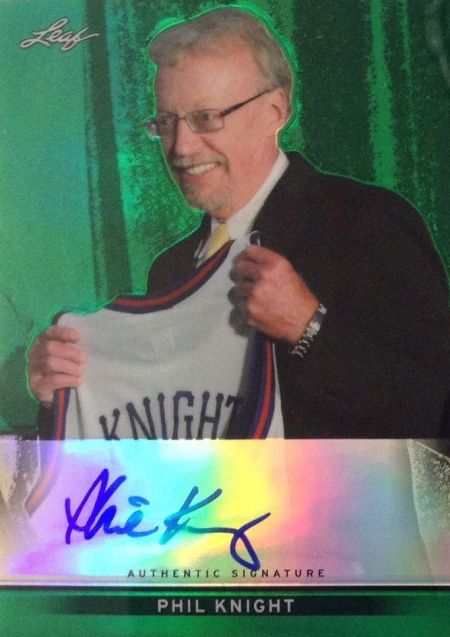 He’s the co-founder of Nike and its now-retired chairman of the board. He’s a member of the Basketball Hall of Fame. He’s probably the only shoe tycoon many people know — at least one who never played in the NBA.

He’s Phil Knight … and even he has a certified autograph for collectors to chase now that he’s in the news.

Knight has stepped down from the company he started in 1964 and branded as Nike in 1978. The 78-year-old is worth more than $24 billion, according to Forbes, and the only card company to land him for an autograph deal was Leaf Trading Cards, which included him in 2012-13 Leaf Metal after his induction into the Hall as a contributor to the game.

Knight appears on 10 different cards in the brand — all autographed — with all but one of them being quite rare. His standard card is un-numbered, but the rest are limited to no more than 50 copies. Five of those are 1/1 creations.

His only other autograph card is of the cut variety as Topps included him on a 1/1 card in its 2014 Allen & Ginter release.