It’s nearly July 4, so it’s time for a few hot dogs to be eaten — and depending on where you are that could mean about 70 in 10 minutes.

Dog Eating Contest where current champ Matt Stonie will try to fend off past winners. Earlier in the morning at 10:50 is when the women compete. (Click the schedule at right to see when it re-airs.)

While competitive eating is a world of its own — and something that doesn’t often hit ESPN airwaves the other 364 days a year — at least a half-dozen eating champs have appeared on trading cards that are available nationally. In fact, Stonie is an odds on favorite to appear as a “World’s Champion” in Topps‘ popular 2016 Allen & Ginter baseball card set when it arrives later this month, which is fitting because that brand is where the trend first surfaced when it comes to eaters on cardboard. 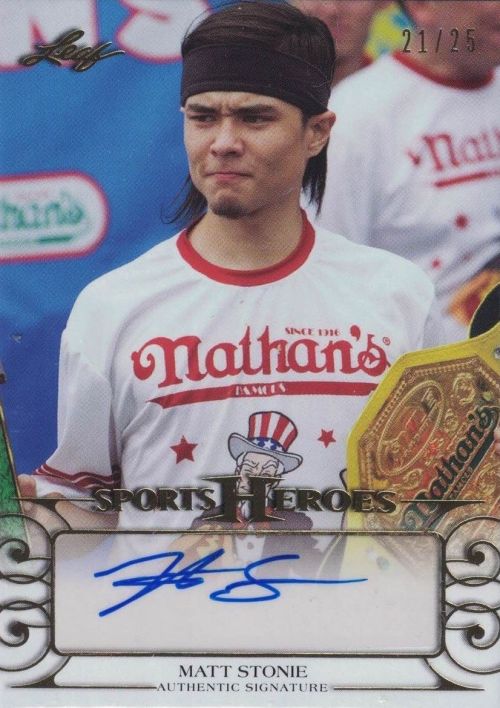 Matt Stonie (Click here for his Facebook page.)
Stonie’s first cards — and first certified autographs — were found in boxes of 2016 Leaf Sports Heroes, which arrived in hobby shops in May. Each box of Heroes includes three autos from all types of sports and the reigning Nathan’s champ has five versions of his card to be found. They include an un-numbered Silver version, a Gold (/25), Blue Spectrum (/10), Silver Spectrum (/5) a Gold Spectrum (/1) and four 1/1 printing plates. That’s not a lot of ink to go around. His Ginter debut should include his first memorabilia cards. 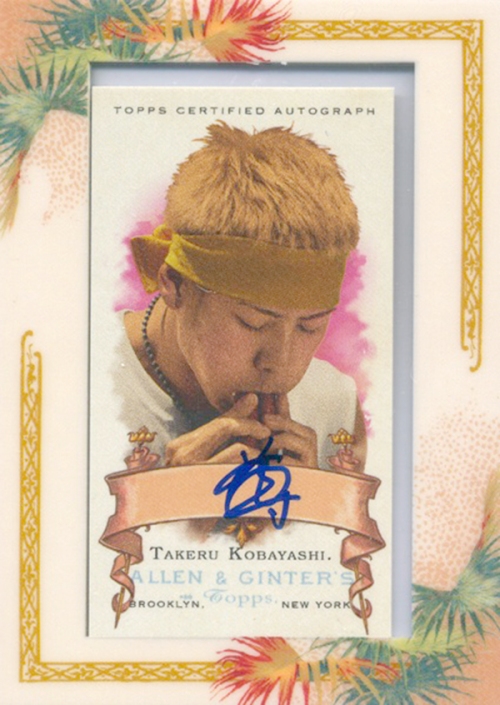 Takeru Kobayashi (Click here for his official site.)
The original baseball cards from Allen & Ginter were from a set of “World’s Champions” inserted into packs of cigarettes to help stiffen the packs and protect the smokes. When Topps revived this brand a decade ago, it opted to include greats from beyond just the traditional sports world and included this past Nathan’s champ. He signed just 200 copies of this card and appeared on 11 other cards in the landmark product. (He did not have a Relic.) He hasn’t had any trading cards since and he’s one of the reasons this box is a pricey one to this day. Where is this five-time Nathan’s champ now? Check out this Sports Illustrated story. 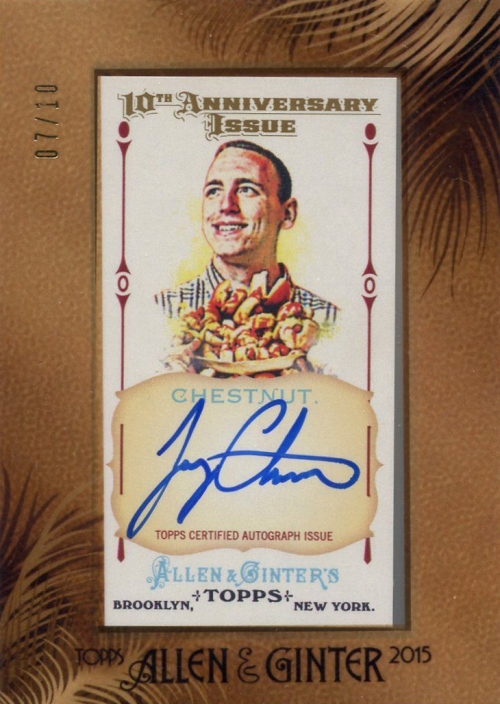 Joey Chestnut (Click here for his Twitter feed.)
Topps included this world-record holder — 73.5 hot dogs in 10 minutes, by the way — in its 2008 version of Allen & Ginter and brought him back for a series of cards last year that celebrated all of the fun inclusions of the last decade. “Jaws” — an eight-time winner of the Nathan’s contest — also signed for cards created by SportKings and Upper Deck in the years since then, running up his total to 43, Of those nearly 20 are signed. The SportKings release included four memorabilia cards, which, once you add on his Ginter Relic, sets the record for most memorabilia cards for an eater. 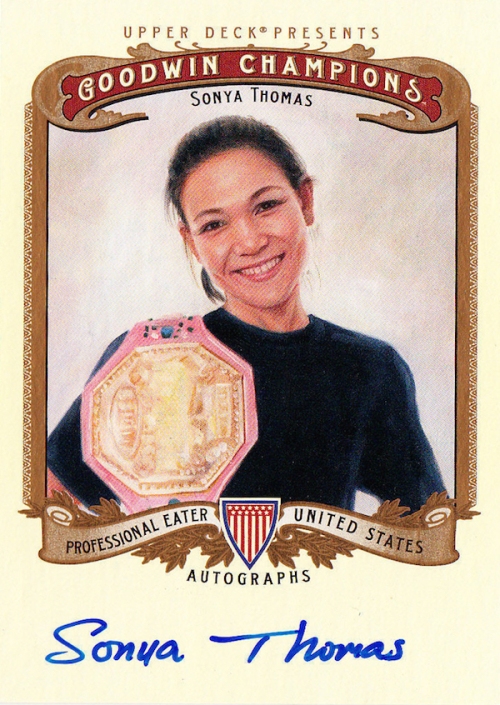 Sonya Thomas (Click here for her official site.)
Over on the women’s side of competitive eating is this hot dog-chomping champ who ate 45 in the 2012 Nathan’s event. That same year, Upper Deck included her in its eclectic Goodwin Champions release where “The Black Widow” signed one card and also appeared on a memorabilia card. (Chestnut also is in this release.) She has just 13 cards in the product — and hasn’t been included in a set since. She won the first three Nathan’s women’s events before being dethroned in 2014. 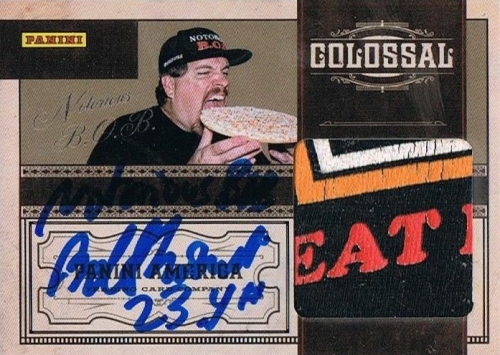 Bob Shoudt (Click here for his official site.)
“Notorious B.O.B.” is a card collector as well as a competitive eating champ and he teamed up with Panini America to appear on promotional cards at the 2012 National Sports Collectors Convention where he also signed for the company. (Why? Why not?) He has a standard-style Americana card as well as a memorabilia card that he signed for some collectors at the event and the company’s VIP party. (He hasn’t won the Nathan’s event but has downed a few hot dogs through the years.) 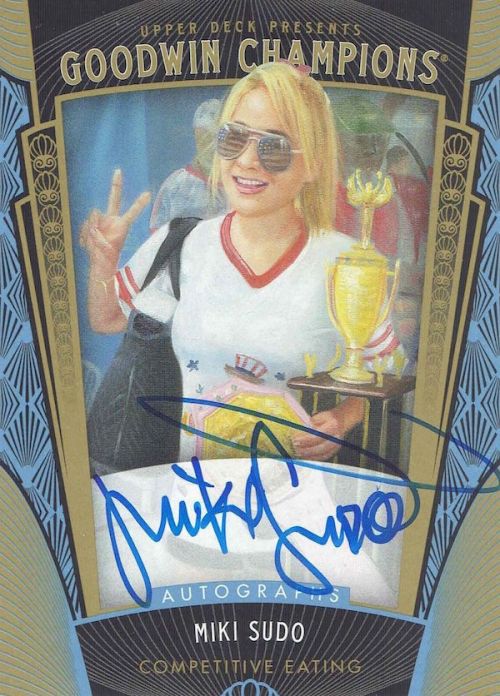 Miki Sudo (Click here for her Twitter feed.)
Last year’s edition of Goodwin Champions included this two-time women’s champ of the Nathan’s event. She dethroned Thomas with 34 hot dogs in 2014 and won it again last year with 38. She has 14 different cards in the Goodwin set, including one autograph limited to just 16 copies where she added an inscription noting her championship. Her standard auto can be seen here, while she also has a pair of memorabilia cards. (A shirt and a patch shirt version.)