Update: A fourth card for the new Daniel Cormier vs. Anderson Silva fight has been added as has a Brock Lesnar vs. Mark Hunt card.

With the UFC 200 main event picture a bit more murky with the news concerning Jon Jones, Topps’ launch of Topps Now for UFC marches on.

A trio of cards that will reflect three bouts from Saturday night’s action are now up for grabs via Topps’ site on a pre-order basis. 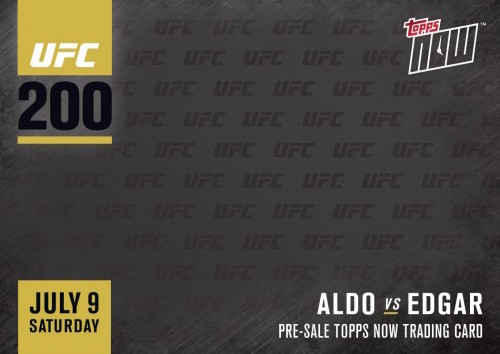 In the future, cards will be available for 24 hours. In this case, that countdown clock begins on Monday when the final images will be made available on cards for the Miesha Tate vs. Amanda Nunes title fight, the José Aldo vs. Frankie Edgar fight and the Cain Velasquez vs. Travis Browne fight.

The Brock Lesnar vs. Mark Hunt fight does not have a card, which is likely due to Lesnar not being a full-time fighter with UFC.

The 2016 Topps Now UFC cards are $9.99 for one or $29.99 for five with additional discounts available for purchases of 10 and 20 cards.  The program launched earlier this year with Major League Baseball, which has new cards on a daily basis.