One of the NBA’s most-successful big men and under-rated talents has retired.

A member of the San Antonio Spurs for 19 seasons, Tim Duncan was a five-time NBA champ, a two-time league MVP, a three-time Finals MVP, a 15-time All-Star and his next stop will undoubtedly be the Basketball Hall of Fame in Springfield, Mass.

He averaged 19 points, 10.8 rebounds and three assists a game for his career and retires as the Spurs’ career leader in games, minutes, field goals, rebounds, blocks, points and plenty more. He’s also a guy who’s not signed autographs much at all in recent years as he’s turned down impressive amounts per sig from card companies. 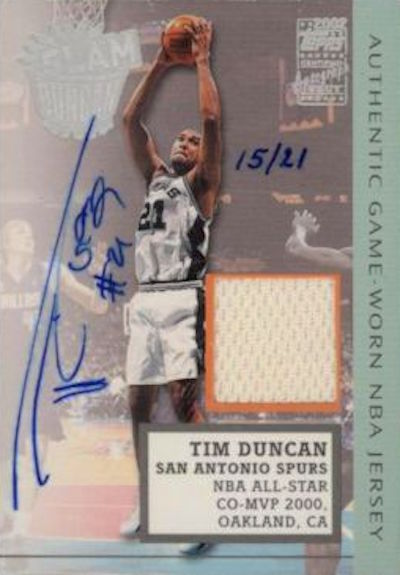 The first pick in the 1997 NBA Draft out of Wake Forest, Duncan has never not been a star on cardboard with past autograph deals with Topps and Press Pass but not much since. He’s got roughly 100 different certified autographs and none in any kind of quantity in the last decade.

His deal with Topps yielded nearly three-fourths of his autographs and the demand has been there to this day with the Finest card up top recently selling for $898. And that’s nothing as plenty others can command that kind of cash — the autographed Relic above sold for $1,951. (No really, go look.) And, again, these sales are not alone since he has so little ink for a player of his stature.