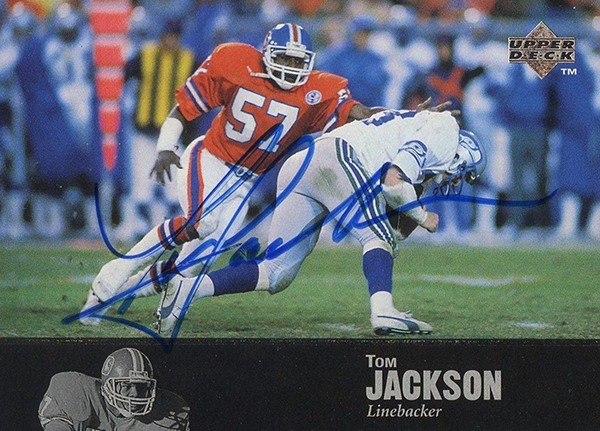 He’s been in the public eye as an NFL player and ESPN analyst every year since 1973, but Tom Jackson may finally have time to do something he’s rarely done before.

Sign autographs for a card company and appear on some football cards.

The New York Daily News is reporting that Jackson may be leaving ESPN, where he’s been part of NFL broadcasts since 1987. It’s been a successful run, and, in 2015, he received the Pro Football Hall of Fame’s Pete Rozelle Radio-Television Award which honors “longtime exceptional contributions to radio and television in professional football.”

Jackson’s NFL career ended the season before his ESPN arrival and it’s a career that’s rarely seen on cardboard despite an explosion in card products in all those years since.

Jackson appears on close to 50 different football cards with his Rookie Card found in the 1978 Topps set. For those wanting a tougher chase, he actually appears on a pair of food-issue items from the year before — a Burger King glass and an Orange Crush can. His standard Topps cards from his 14-year career all spent with the Denver Broncos are limited to cards in the 1979, 1980, 1982, 1984 and 1985 sets. That’s it. The rest are oddball releases.

When it comes to certified autographs, he appears on roughly 10 cards and they are spread over five products. His first autograph is in the landmark 1997 Upper Deck Legends set, while he’s appeared on nothing since a couple of cards in 2009 Press Pass Legends. Only two of his cards — the standard card in both of those products — are not serial-numbered. The rest are limited with one to 250 copies and the rest less than 75.

Even recent-year card appearances are rare for Jackson when it comes to NFL sets. He appears on just a single card from 2004 Upper Deck Legends and hasn’t had multiple cards in an NFL product since 2003 Donruss Classics and 2003 Playoff Honors.