After another ridiculously dominating run in the pool last night, Michael Phelps claimed the 22nd Olympic gold medal of his career and ran up his medal collection to 26.

It’s a mark that’s not likely to be touched — but it’s also a mark that can’t compare to his number of certified autographs.

Although he’s a pricey signature, he’s one of the most-prolific Olympians when it comes to autographed cards. 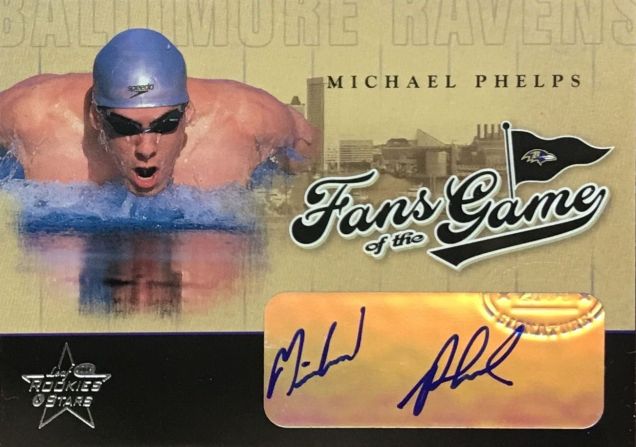 Phelps’ first autograph came way back in 2004 with this Donruss/Playoff Fans of the Game auto found in packs of Rookies & Stars football cards. Why? He was a celeb whose NFL affinity was noted on a card — a new thing that helped pave the way for many more celebrity autographs in collectors’ packs of cards.

Now may not be the time to go chasing one — prices will be high as demand should be up there, too — but, on the same token, he’s clearly the No. 1 autograph to own when it comes to Olympic sports.

On the high end, a pair of active eBay auctions for rare or key graded Phelps autos have asking prices of $15,000 per card. One is one of his 1/1 Ginter autographs signed in gold ink and graded a PSA 10, while the other is a Fans of the Game that is one of only two graded by BGS and it’s got a 9 card/10 auto mark. They are not alone among the active auctions.

When it comes to actual sales, only one Phelps card has topped the $1,000 mark and that’s for a PSA 10 copy of his Fans of the Game auto — which is by far his best-selling auto despite its silver sticker, which was common at the time but is not now. That card sold for $1,358 last month. In all, more than 40 Phelps autos have sold for $200 or more on eBay in recent months.

The good news is that, like his medals, there are plenty. A small sampling of his autographs can be seen below.