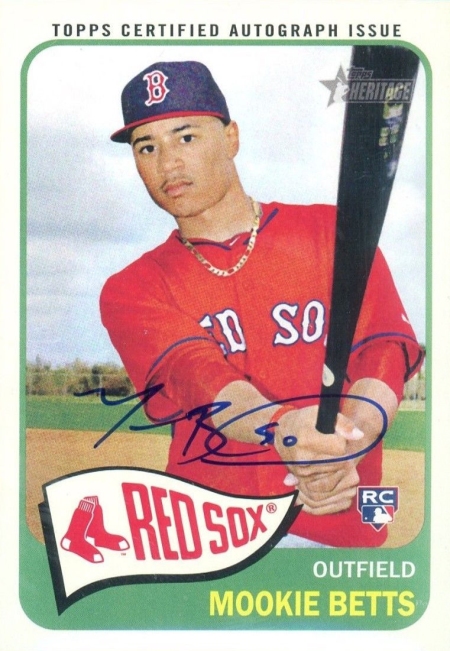 This Red Sox slugger has been in some elite company this season and his cardboard continues to pick up momentum.

His name is Mookie Betts and he smacked another homer — a three-run shot — last night in Baltimore to up his season total to 28. That comes off the heels of a three-homer game Sunday that put him side-by-side with Ted Williams as the only Red Sox players with a pair of three-homer games in the same season.

It’s sparked a wave of Topps Now cards — and pricey Relics that sold out near-instantly — but it’s not the only cardboard that Betts has that’s now in more demand.

Betts appears on nearly 900 different baseball cards so far in his young career with nearly 200 of those being certified autographs. He has just seven Rookie Cards found in 2014 brands — Bowman Sterling, Panini Classics, National Treasures, Stadium Club, Topps Heritage High Number and Topps Update — and that’s where one of his hottest (yet arguably biggest bargain) cards can be found.

His 2014 Topps Heritage High Number card isn’t as readily available as his other RCs since it’s only found in a boxed set and the autographed version of his RC (seen up top) is one that has sold for as much as $415 as a PSA 10. That notable sale is not alone as a BGS 9.5 (10 auto) previously sold for $280, while raw copies have sold for $150.

It doesn’t hurt that the memorable 1965 Topps design is part of that Heritage release and potentially fueling speculation in that one is that, while the sets seem readily available, they are in the wake of a 1963-style set two years earlier that remains a strong seller (and actually has sold for much more than that). While the 2014 set isn’t as limited as that past one, it’s arguably a stronger set with a deeper autograph checklist where one signature is found per box. 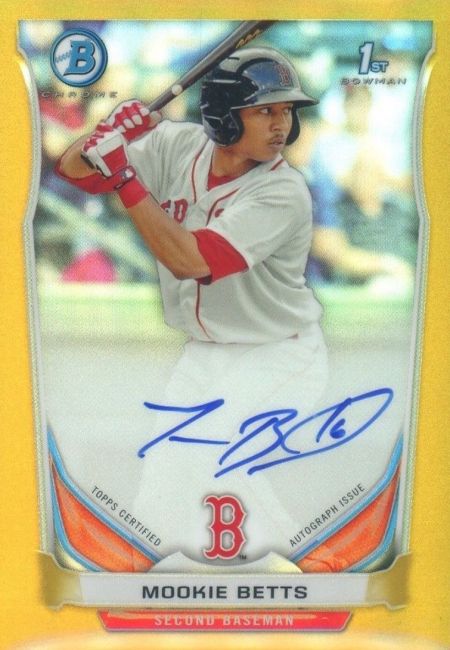 Betts’ first autographs can be found in 2013 Panini Prizm Perennial Draft Picks, but his first Bowman Chrome autograph that arrived in 2014 is the one that’s sparking big sales online. Rarer graded copies of his card have sold for as much as $2,700, though that sale was from back in June. (He’s hotter now.) There are several sales of $1,000 or more, which show that he’s on the radar of fans — but that there still might be even more room to grow, too.

And with talk of a potential American League MVP award in his future, there might be even more.