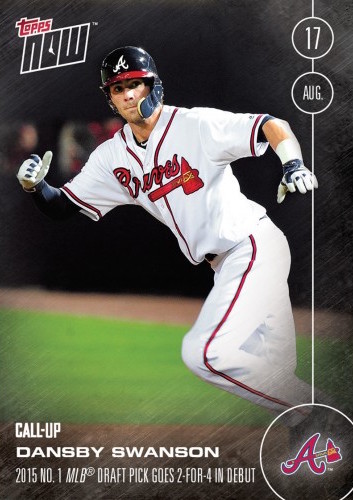 The Atlanta Braves have the worst record in baseball but they’ll be one of the most-watched teams when it comes to hobbyists the rest of this season thanks to a call-up that appears to have paid off pretty well on Wednesday night.

Former No. 1 overall draft pick Dansby Swanson arrived and went 2-for-4 with a pair of singles in his big-league debut. The home-state star’s promotion is about more than just performance, though, as less than 10 months ago, he was a member of the Arizona Diamondbacks organization — and now he’s immediately one of the faces of a franchise aiming to rebuild. It’s a franchise with plenty of hobby favorites in the past and it doesn’t hurt that there’s a new stadium coming next year, too.

Now, the questions come about cardboard. Will this Rookie Cards now be included in 2017 Topps Series 1 and 2017 Topps Heritage? We don’t know that yet — but we do know he’s among today’s Topps Now stars on a call-up card — not once but twice. 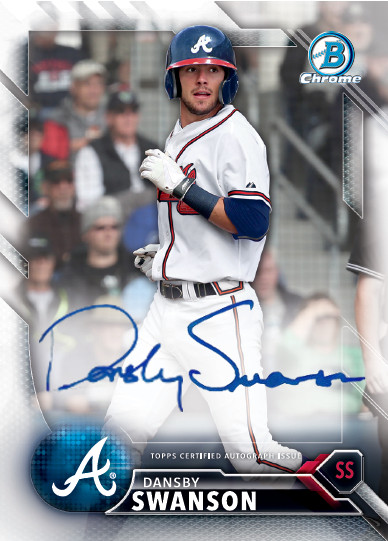 Right now, Swanson appears on more than 600 different cards with more than half of those being certified autographs. His first Bowman Chrome autographs arrived in 2015 Bowman Draft the day before the legendary trade — legendary because he’s the first No. 1 pick traded before his MLB debut and because of how bad the return might be looking for Arizona as Shelby Miller is presently in the minor leagues.

That first Chrome auto has sold for as much as $1,900 for high-grade rare copies in recent months, though others are consistent sellers above $200 as the supply begins to dry up. (It’s a relatively plentiful card in all of its shades.) His first Braves Chrome auto arrived in 2016 Bowman with that one’s Superfractor auto selling for $1,913.55 back in July.

Swanson has been a regular signer for prospect brands since last year with cards from Panini America, Topps, Onyx and Leaf Trading Cards. His other previous Topps autos include 2015 Bowman’s Best and 2016 Bowman Inception, while his earliest ink came from Panini thanks to USA Baseball. He appears on nearly 20 different USA autographs from 2014, giving collectors their earliest ink options there. And based on completed sales, they are probably some of his best bargains, too.

Being a home-state player — he was born 20-some miles away from Atlanta in Kennesaw and went to high school in Marietta — he won’t have to put up garish numbers to be popular with Braves fans.

And that should translate to ongoing popularity for his cardboard.