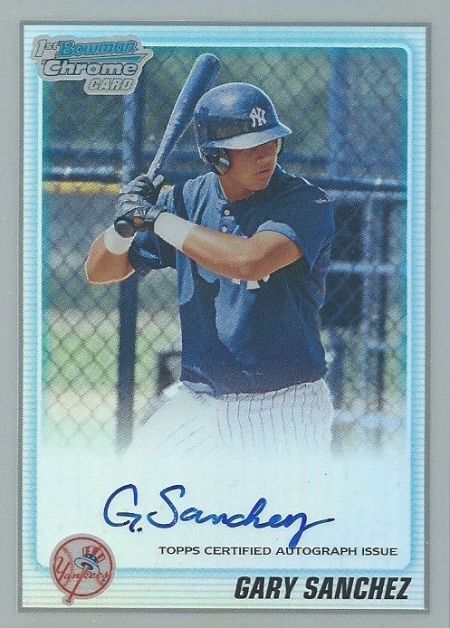 Gary Sanchez is a rookie for the New York Yankees, though he’s been around the baseball block a bit.

He’s 23 but he’s already got seven years of minor-league experience with two big-league at-bats last season before his call-up this year — one that’s paid off pretty well.

How well? He’s got six home runs and 12 RBI while batting .379 in 15 games, tying him for the most-powerful start to a career for a Yankee through 17 games.

“This is a time when he’s going to play and play a lot,” Brian McCann told Newsday. He’s a future All-Star. There’s not many guys walking around with his talent. He’s one of the best young catchers I’ve seen since I’ve been in the big leagues.”

Sanchez’s long trek to the majors began as a 16-year-old international free agent signee out of the Dominican Republic in 2009. His first cardboard arrived the following year and, like fellow Yankees rookie Aaron Judge, he has plenty of cards for collectors to chase.

He appears on more than 700 different cards with 11 of those being 2016 Rookie Cards from Topps and Panini America thanks to his two games last season. His first prospect cards came way back in 2010, though, in Bowman Chrome and Bowman Sterling, Elite Extra Edition and even a pair of TRISTAR sets, Pursuit and Obak.

His first autographs arrived that year but he’s clearly not a prolific of a signer as Judge with fewer than 150 different signed cards. (Judge has more than 300.) The earliest and most-sought-after is his 2010 Bowman Chrome Prospects auto and all of its Refractor parallels, while the Donruss Elite Extra Edition card offers an affordable alternative from that year.

Asking prices for high-grade rare copies of his first card are pushing $5,000 in some extremes, but he’s got Superfractors from years since that can be had for less. When it comes to completed sales it’s a bit different with most of his high-dollar cards selling between $200 and $500.

In Yankees pinstripes, though, there seems like there will be more high marks to come — especially if the homers continue.