He’s a 29-year-old, 5-foot-11 second baseman-shortstop who’s in his fifth season as a big-leaguer. He’s a Minnesota Twin with Defensive Player of the Year and All-Star honors.

He’s also a guy who, thanks to a three-homer game last night while batting lead-off, has a career-high 38 homers this season.

He’s Brian Dozier — and he’s also not the easiest guy to find on baseball cards. 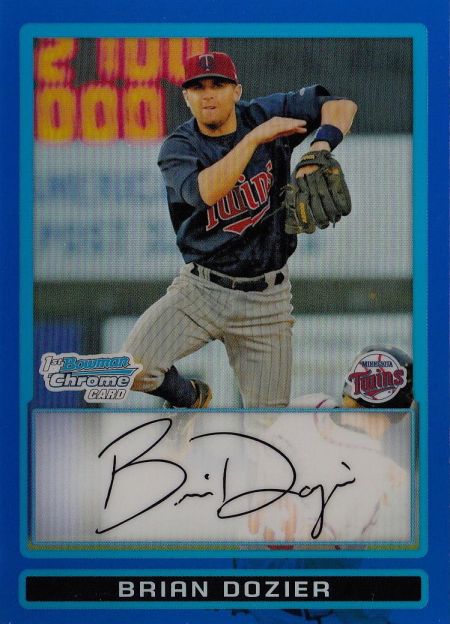 Dozier made his cardboard debut back in 2009 Bowman Draft where he appeared on more than 20 cards but no certified autographs. The ink didn’t arrive until 2012 — the same year as his Rookie Cards — with Topps Finest and Topps Heritage High Number being the only place to find him. And those are the only places to find his 14 certified autos — that’s all he has.

Overall, he appears on a modest number of cards for a player from this era — fewer than 700 — with just seven of those being Rookie Cards (Bowman Chrome, Bowman Draft, Bowman Sterling, Topps Chrome, Topps Update and Topps Heritage High Number).

Dozier’s power shouldn’t be that surprising since he hit 28 last season and 23 the year before that, but he’s also been on a team that’s lost 90 or more games every year but last season and is on pace to do it again — maybe sometime this week.

Because of his lack of cardboard, he seems to be more in demand and a quick look at completed auctions shows that. Among active auctions, several of his in-demand rarities — you know, Superfractors — have asking prices that are beefy, too. His Finest auto is a steady seller raw and is pushing $90 in top grades.