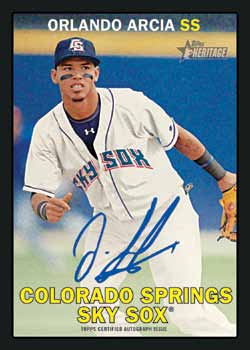 Topps Heritage arrived today for the big-leaguers, but it will be another week for the players down on the farm who appear on 2016 Topps Heritage Minor League cards.

But the good news is that the autograph checklist is loaded with some big-league talent thanks to a talented crop of newcomers and a set of former minor-leaguers who are now established in The Show. 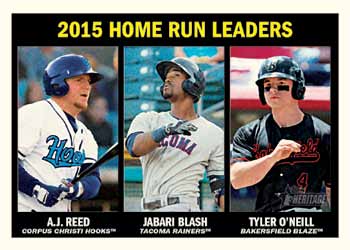 Set to arrive next week, 2016 Topps Heritage Minor League boxes will include one autograph and one Relic along with a smaller box size of just 18 packs. The basic set will have 200 cards capped by 25 short-prints as well as a number of variations just like the big-leaguers. Ten of them — some of the elite names in the set — will have facsimile-auto variations to chase.

Among the signers in this one will include Dansby Swanson, Andrew Benintendi and Alex Bregman and they will also have variation autographs where their teams are not mentioned. … As a bonus, there will be Looming Legacy autos of five big-leaguers including Bryce Harper and Mike Trout to add to the chase here.