“Arnie’s Army” is in mourning this evening.

Golf icon Arnold Palmer has died at age 87, leaving behind a legendary career and countless fans along with decades of memorabilia and memories. He’s heavily credited with helping the

sport grow on television, for his personable demeanor, his countless businesses and, of course, his performances against rivals.

“We loved him with a mythic American joy,” his biographer, James Dodson, told GolfWeek. “He represented everything that is great about golf. The friendship, the fellowship, the laughter, the impossibility of golf, the sudden rapture moment that brings you back, a moment that you never forget, that’s Arnold Palmer in spades. He’s the defining figure in golf.”

He won seven majors and 62 tournaments in his career and was awarded the Presidential Medal of Freedom in 2004 — and even that can be found among his trading cards. 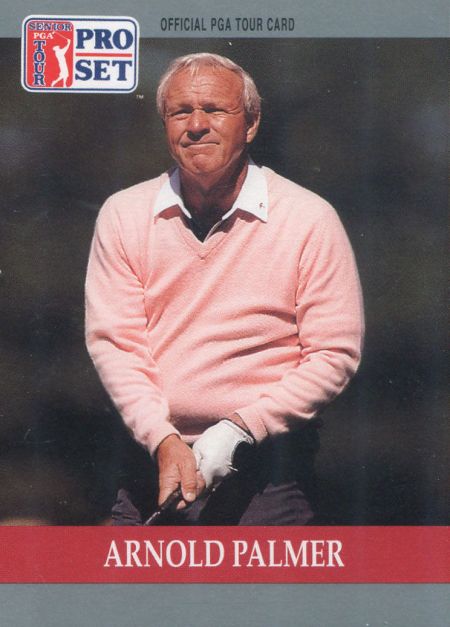 Golf cards weren’t heavily distributed during the prime of his career, but he’s still got a number of options for collectors to chase. He appears on nearly 500 cards and more than 150 of those are certified autographs that have been in demand for years. By traditional cardboard definitions, his Rookie Card came in the 1990 Pro Set release, a boxed set that was heavily distributed as that company explored the collecting options as the hobby exploded in the late 1980s and early 1990s.

Most of Palmer’s certified autographs came via Upper Deck, which launched the newest wave of golf collecting — at least on cardboard — in 2001. However he also signed for SportKings, Leaf Trading Cards and Topps for its Allen & Ginter set in 2012.

All of the cardboard came well after his prime, but it also served as a reminder of his greatness.

“Arnold transcended the game of golf,” Jack Nicklaus said in a statement. “He was more than a golfer or even great golfer. He was an icon. He was a legend. Arnold was someone who was a pioneer in his sport. He took the game from one level to a higher level, virtually by himself. Along the way, he had millions of adoring fans_Barbara and I among them. We were great competitors, who loved competing against each other, but we were always great friends along the way. Arnold always had my back, and I had his. We were always there for each other. That never changed. He was the king of our sport and always will be.”

“It’s hard to believe that Arnold has passed, and I’m deeply saddened by his loss,” Woods said in a statement. “He meant so much to the game and to me personally. I knew that I could always call him for advice, and I looked forward to seeing him at Bay Hill and the Masters. Arnold touched so many people. My kids were born at the Winnie Palmer Hospital for Women & Babies, and his philanthropic work will be remembered along with his accomplishments in golf. It was an honor and privilege to have known Arnold, and I’m forever grateful for his friendship.”