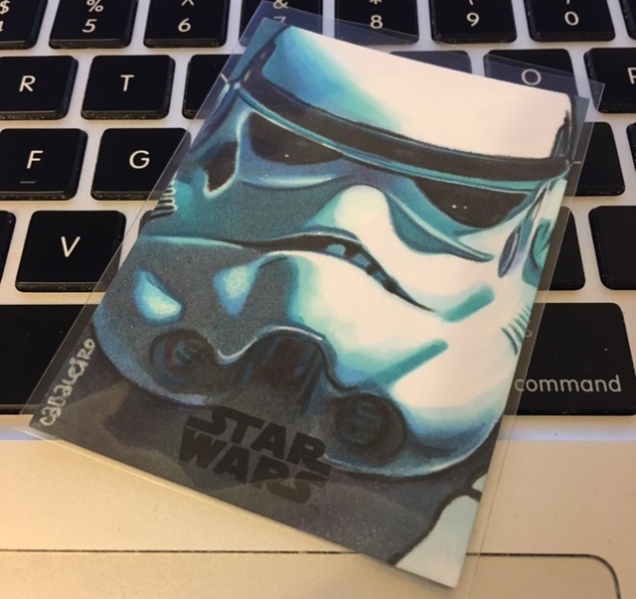 What’s Buzz-worthy: When this one was originally unveiled it was known as “Journey to Rogue One” because its approach mirrored the challenges Topps faced when it embarked on its Journey to The Force Awakens — tease an upcoming movie on cardboard without giving anything away. Somewhere since that time, its name changed to Mission Briefing and, while the box looks like it’s a slick modern approach to cards, this one still carries its retro feel like the first Journey. It’s a tad disconnected in spots, but it still generally works. The basic set uses the design from the 1983 Return of the Jedi set with crisp, clear images and printing that shows us the story surrounding the upcoming movie — in other words scenes from past films that tie in here. It’s a solid set. … You get a number of parallels in each pack since there are three commonly found types (and more if you get lucky) in a box while there is a smattering of inserts. The character foil and Darth Vader cards stand out well with their look and their holoboard stock, while the Death Star insert is solid with a full-bleed design on retro stock that makes one wonder what Stadium Club Retro might feel like or what the recently released Star Wars sets could have been on retro stock. Overall, this one was more fun than this collector expected with a sketch card and some fun surprises on inserts. Why was it surprising? There’s been a lot of cardboard for the franchise in the last year — so it all starts to feel the same. This one does follow the Journey formula of a past design with a retro feel — and that just feels fun as long as the box isn’t too pricey. This collector wishes this kind of approach would be used after the film arrives, giving us the true Heritage feel of the 1980s with new material — enough to tell the whole story this way.

Product Grade: B+ (solid base set though maybe too many parallels — also not fan of patches)
Box Grade: A (can’t argue with a 1/1)
Fun Grade: A (good variety of inserts)