David Ross‘ final Game at Wrigley Field came with a serenade from Eddie Vedder on Sunday night, and as he marches toward retirement there’s one thing for sure about the Chicago Cubs’ 39-year-old catcher. 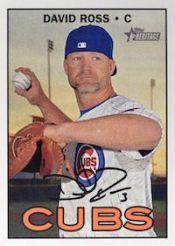 He’s easily among the toughest autographs on the team when it comes to certified cardboard.

That’s something worth noting as his career comes to an end — and potentially in the biggest way possible with a World Series win for the historically downtrodden team.

“I’ve had a storybook year, honestly. There are so many things I can talk about that have happened to me over this year,” Ross told The Associated Press. “Everybody was looking at me like, dude, Eddie Vedder just dedicated the whole seventh-inning stretch to you and I’m like, my mind’s blown. I’m thinking about being out of the game and he’s a quality individual. He’s just a good person, rock star, everybody knows who Eddie Vedder is. He says my name — it’s a huge compliment.” 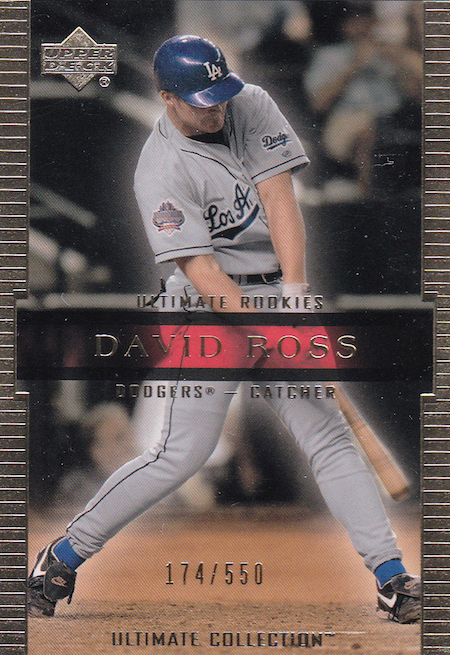 Ross is in his 15th season this year after he broke into the majors in 2002 as a member of the Los Angeles Dodgers, He played in eight games and hit .200. Fast-forward all these years and six teams later he’s a career .229 hitter surrounded by some of the biggest young stars in the game. He’s known as “Grandpa Rossy.”

Kris Bryant, Kyle Schwarber, Addison Russell, Javier Baez, Aroldis Chapman … there’s no shortage of autographs fro those names, though they will cost you. There’s plenty of supply and plenty of demand when it comes to their ink.

For  Ross? Not so much. Despite a lengthy career in The Show, he barely tops 250 different total baseball cards, has just eight Rookie Cards (Remember the year?) and just six certified autographs.

Just six certified autographs in 15 years. For comparison’s sake, most of his young teammates had more than that before they were even drafted thanks to USA Baseball sets.

That number wouldn’t fill some sections of Wrigley Field — and you can bet there are some still sitting in unopened boxes.

Ross’ Rookie Cards are found in a handful of 2002 brands — Donruss Rookies, Fleer Tradition Update, Leaf Rookies & Stars, SP Authentic, Ultimate Collection, Upper Deck Diamond Connection and Upper Deck Honor Roll. That’s it. Nothing from Topps, which is the only MLB-approved player in the game today.

Is Ross a money-maker right now since he’s on the cusp of a peak in his career … or at least on the cusp on his second World Series ring? (He was on the 2013 Boston Red Sox.) Not really, though there are so few copies of some key cards that have made it to eBay. His SPx auto has sold for as much as $12, while his priciest RC is the Ultimate Collection card that hasn’t topped $6. One of his USA autos did top $20 — but it’s the only one to have made it onto the market.

Are there more Grandpa Rossy cards sitting in collections out there where they have been for years? Undoubtedly. Will there be fans wanting his ink if the Cubs win it all? No question.

That’s a scenario that all Cubs fans, not just Eddie Vedder, dream of singing about.