What’s buzz-worthy: Although other companies have them planned, Leaf is the first to visually debut baseball cards of former NFL quarterback Tim Tebow with this release, which will be packed with nothing but on-card autographs.

Keep reading for more info and a full gallery. 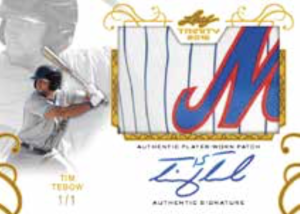 The Basics: Among the possibilities found here are Jumbo Patch Autos, Trinity Signatures with inscriptions and Trinity Clear autos on acetate. Each of them will have multiple parallels. No other details were released.