What’s buzz-worthy: The anniversary of the original Star Wars film gets a cardboard celebration with a look back that includes past posters, autographs of top stars and a push toward today’s films, too.

Keep reading for more as well as a gallery of images. 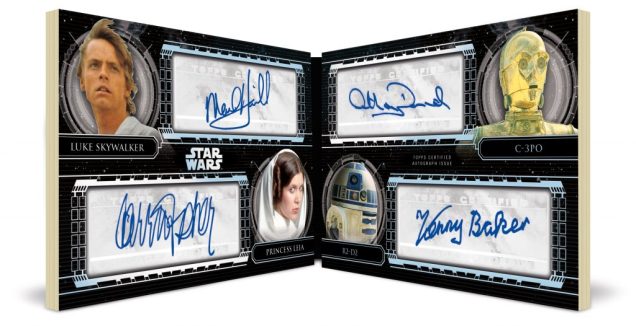 The Basics: Hobby boxes will include a mix of two hits from autographs, sketch cards, printing plates, medallions and buyback hits, according to Topps. … The basic set will consist of 200 cards that spotlight moments, behind-the-scenes glimpses, franchise history and the storylines that carry through to today. Each will have six parallels — Green (one per pack), Blue (six per box), Purple (/100), Gold (/40) and 1/1 Red and printing plates. … Posters from around the world will make their way into the release as well with iconic artists’ takes showcased on cards. … The autograph lineup will include standard autos from more than 30 people involved with the film each with Purple (/40), Gold (/10) and 1/1 Red and printing plate parallels to chase. Also in the mix will be dual autos (/3), triples (/3) quad books (/2) and a six-auto book (/2). … Autograph medallions will be limited to 10 copies, while unsigned cards will have Blue (/199), Purple (/99), Gold (/25) and Red (/10) versions. … Also in the mix here will be sketches showing moments from the first film along with buyback autos and Relics from past releases.

Update: Each box will include one autograph or sketch card along with … a combination of one medallion or auto medallion or one buyback hit or one printing plate.