What: 2016-17 UD Ice hockey cards
Arrives: March 29
Box basics: One autograph and one memorabilia or Exquisite card per six-pack box (20 boxes per case via two inners)

What’s buzz-worthy: In addition to the hits, this one will include two Ice Premieres Rookie Cards, a Sub Zero card and one more card from one of these sets — Ice Champions, World Juniors or Ice Premieres. 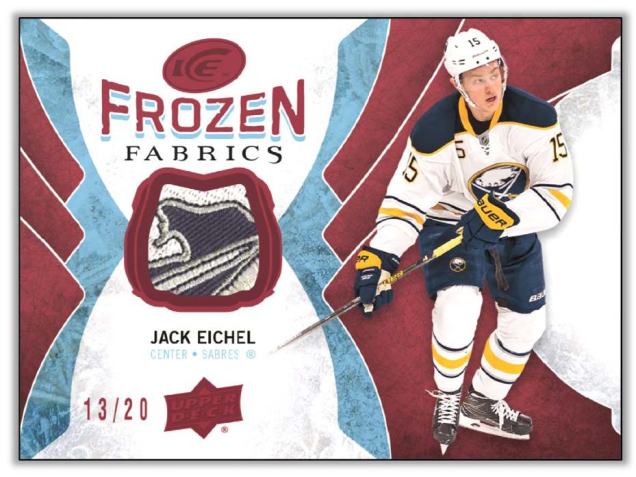 The Basics: The basic set will be printed on acetate and consist of 100 cards, while the Sub Zero inserts are one in every four packs and Ice Champions are much rarer at one in 80. The World Juniors cards will be tiered with 699 and 299 copies of each card made. … Ice Premieres rookies will have five tiers — 1,299, 999, 499, 249 and 99 copies per tier — along with autographs ranging from 25 to 299 copies. Patch autos will be limited to 10. … The second round of Exquisite cards are here with Legends (/99), Signatures, Materials Signatures, two tiers of rookies and rookie autos and each have Spectrum versions. … On the memorabilia side, there will be Frozen Foursomes, Frozen Fabries, Fresh Threads and Rookie Relic Jumbos. Eager of these will have a Red parallel. … Additional autos will include Superb Script (two tiers and portraits), Glacial Graphs (with a Black parallel), Rinkside Signings and Signature Swatches.