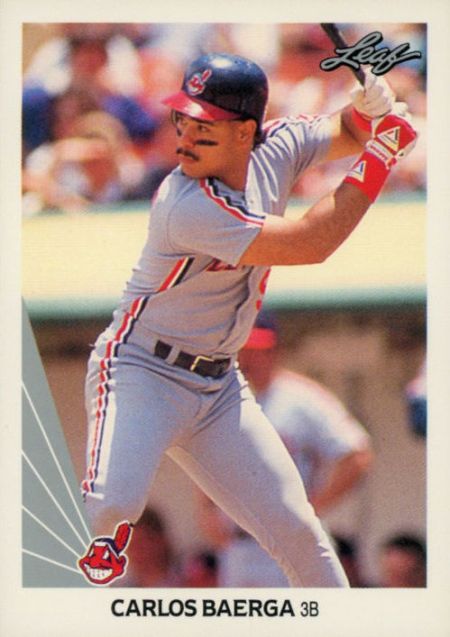 It was the summer of 1990 when a new premium set arrived upon the scene with seemingly red-hot wax that was only to be found in one hobby shop far from where I lived. I bought two packs of 1990 Leaf — and oddly I landed two Ken Griffey Jr. cards, selling one of them for $7 to an adult while standing in line to enter a small card show the following day. That money was used to get a lame vinyl logo baseball for several members of a Rookie League team to sign — one of them made The Show for some coffee as a Florida Marlin. It might have been the first time I sold a card for “real cash” and it definitely was my first time getting autographs at a show.

I never bought another pack — and still might not have to this day. That was the sum of my 1990 Leaf experience.

It was a very different time back then as certified autographs barely existed and certainly weren’t expected in every box or pack. Memorabilia cards hadn’t happened yet. “Premium” in some cases meant white stock, different kinds of packaging and whatever other variables that seemed marketable and, in turn, believable to us kids who collected like we had never collected before more and more. The 1990 Leaf set didn’t wow me — and it would be topped immensely in the coming months and years — but a single card in that set did hold a personal record for me for some time.

My Carlos Baerga Rookie Card didn’t enter my collection that summer — it was a few years later, probably 1993, when I was at a different small card show and had to pay a “regional premium” for a star for a hot team as the Indians were an upstart loaded squad. Why do I think it was that year? Another card I remember being big at that show was Shaquille O’Neal‘s Upper Deck Rookie Card — a guy whose arrival was a game-changer for collecting and the card industry, particularly on the autographs and licensing side.

I paid $15 for my Baerga RC and for years — at least the ones before autographs and game-used — that was the record for the most I had ever paid for a single card. I’d spent more on wax and chasing singles that were attainable but always preferred to pull my cards and trade the big stuff I found for the stuff I wanted. That was much easier to do back then.

Now? I can pick up as many of those as I want with the flick of a finger. I can buy a PSA 10 copy or even a signed one for less than that $15. Today, my raw copy of that card is still in a box somewhere in a top-loader but it’s worthless. In fact, there are a few bulk lots on eBay right now that might be fun buys once I’m done for the day.

This card wasn’t an iconic one on a national collecting scale back then, but his team was one that appeared to be primed for history. Ultimately, that didn’t happen and he (and others) moved on to other teams. Today, the card is ultimately worthless — and it’s not alone. A number of past iconic cards — ones much larger than this one — can now be had for pennies on the previous dollar.

There’s nothing wrong with that, actually, as times definitely have changed and cards are ultimately much better now on the whole. Now we can revisit them for much less than what we paid back then — and that’s a good thing, too.

What prompted this thought on a cold Tuesday in January? A thread over on the Blowout Forum where other collectors offer up their picks for cards that were huge in the past but are now worthless. It’s worth checking out.