What’s buzz-worthy: TRISTAR’s autographed baseball chase goes to the north side of Chicago with some chase baseballs and memorabilia items to be found in some boxes. 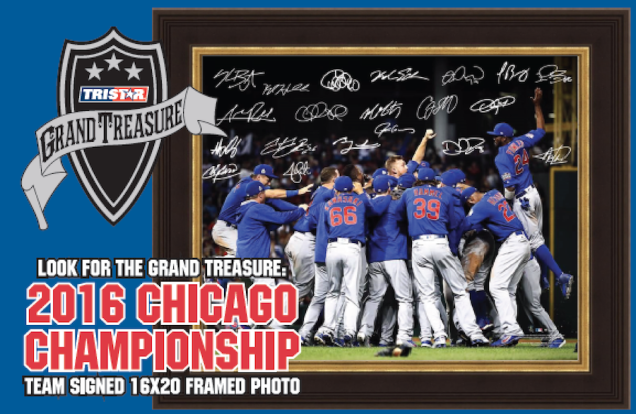 The Basics: Each 12-box case will include three current Chicago Cubs, three Hall of Famers who played for the team, five past fan favorites and one 24-karat gold leather signed ball. All baseballs will be limited and numbered to no more than 48 copies with holograms that link them to this product. … Among the notable inclusions here is a Grand Treasure 16-by-20 autographed photo and Treasure Tickets for autographed Ernie Banks jerseys. … The 2016 World Series team members signed on World Series balls for the release as well, while team legend Ryne Sandberg signed and inscribed 23 balls with extra Cubs flair for this one. … Among other signers teased for this one include Kris Bryant, Jon Lester, Ben Zobrist, Billy Williams, Andre Dawson, Mark Grace, Kerry Wood, Kyle Schwarber, David Ross, Dexter Fowler, Anthony Rizzo, Lou Piniella, Lee Smith, Mark Prior and Fergie Jenkins. … Just 108 cases will be made and these will carry a suggested retail price of $140 per box.