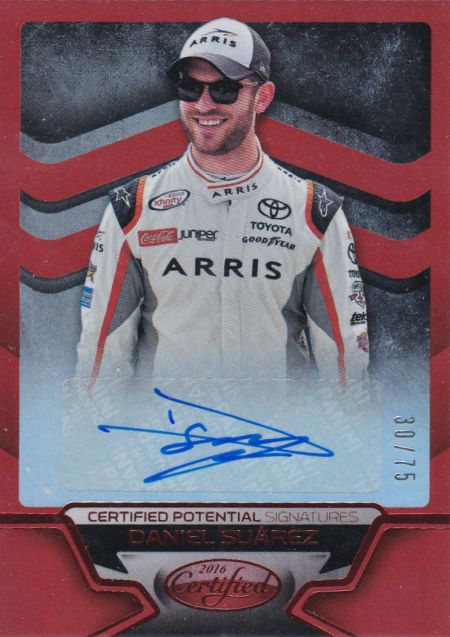 Carl Edwards‘ surprise exit from NASCAR for the upcoming season puts the spotlight on his replacement and, in turn, is likely to warm things up for what cardboard there is for him.

Replacing Edwards in the No. 19 Toyota of Joe Gibbs Racing is Daniel Suarez, who’s already made a little history in recent months before becoming the newest rookie in the Monster Energy NASCAR Cup Series.

Suarez was the first Mexican-born driver to win a NASCAR national championship when he took home top honors in the Xfinity Series last year.

He’ll be a rookie with a yellow bumper when he debuts at the Daytona 500 but has just a single Rookie Card for collectors to chase. That’s in the 2014 Total Memorabilia set released by Press Pass. That card has three parallels and there are four autographed cards of him in that product — a total of just 254 signed cards and that’s it for ink.

Since that debut, he’s appeared on nearly 30 different autographed cards and they have all come in the new wave of NASCAR products from Panini America — Certified, Prizm and Torque. It appears he only has memorabilia cards in the recently released National Treasures.

Despite having all this cardboard, just three of his certified autographs from this year presently appear on eBay and there’s not one copy of his Rookie Card. Among completed auctions, his autographs have sold for as much as $40, which isn’t shabby considering he’s not exactly a household name just yet. Most have sold for $20 and up, though there have been lows of around $10 shipped.

What might the future hold for a relatively young driver entering the biggest stage in American racing with a quality team when his cardboard is already selling pretty well?

That’s a good question — and the answers at Daytona start in February.