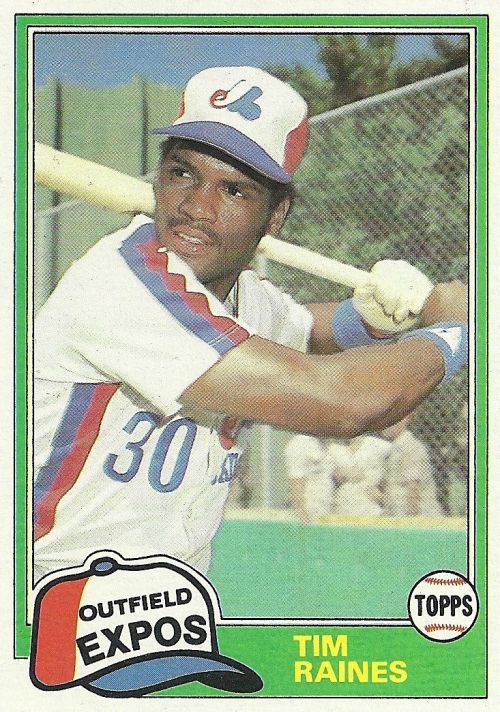 Update: Raines was voted into the Hall of Fame Wednesday night along with 1991 rookies Jeff Bagwell and Ivan Rodriguez.

If Tim Raines makes it into the Baseball Hall of Fame later today, he just might be one of the easier Cooperstown residents to collect based on his early cardboard.

He’s got just four regular-issue cards and one team-issued release from his Rookie Card season of 1981 and all but one of them can be easily found for a few bucks. These quickly printed and often roughly cut gems of the past are not easy finds in high grade, though — even straight out of packs opened today — so graded copies have been where the biggest action has been of late.

Raines appears on cards in the 1981 Donruss (No. 538), Topps (No. 479), O-Pee-Chee (No. 136) and Topps Traded (No. 816) sets, while an Expos postcards set also includes the guy who’d later be known as Rock that year. When it comes to raw copies, well, there have been some impressive bulk auctions, but there’s nothing compared to the high-grade copies — which aren’t easy to get when those raw 1981 cards are submitted for grading — when it comes to sales.

But first let’s check out the pop report.

The Donruss card also is a tougher find in a slab with just 814 total graded but of those 188 copies received a 10. The most-received grade there is a PSA 9 at 358 copies.

The toughest by far though? O-Pee-Chee and that’s likely because many people don’t consider their rough-cut cards worth grading. A total of just 99 copies have been graded with four getting a PSA 10, while 47 got a PSA 9 and 38 got a PSA 8.

And about those sales? The asking prices on current auctions for graded cards are steep, they’re not in touch with actual sales. Here’s a rundown of 10 impressive graded Raines RC sales on eBay: