What’s buzz-worthy: The newest president gets a new wave of cardboard with an update to the second series of Decision 2016. There will be no more than 55 cases made.

Keep reading for more and a gallery of images from the product. 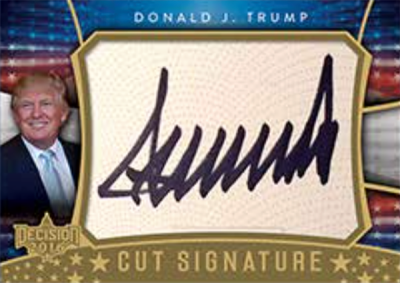 The Basics: Half of the cards in these boxes will be Series 2, while the rest will be new. There will be 54 new cards in the base set that will include the inauguration, the debates, Election Day, cabinet picks, advisors and memorable moments. … There will be 10 other sets that are either new or updated in this one with autographs that will have Red, Blue and Green parallels, a new “thank-you tour” insert, a President Elect set, World Leader flag patches, box-toppers, inserts for Martin Luther King and Fidel Castro, new Political Gems, Party Pals booklets, money and coin cards and a new wave of Trump Under Fire cards. … A box format and hit ratios was not announced but the format is likely to be like Series 2.

Click here to see all of our past pieces about Decision 2016 trading cards here on The Buzz.