One of television’s female icons has died.

Mary Tyler Moore was 80 years old and died Wednesday after a recent health scare that had her hospitalized for the last week.

“A groundbreaking actress, producer, and passionate advocate for the Juvenile Diabetes Research Foundation, Mary will be remembered as a fearless visionary who turned the world on with her smile,” said Mara Buxbaum, Moore’s representative, to The Huffington Post.

Her iconic roles on The Dick Van Dyke Show and The Mary Tyler Moore Show helped change how women were seen on television — but you won’t find a number of certified autographs to help collectors remember her place in entertainment history. 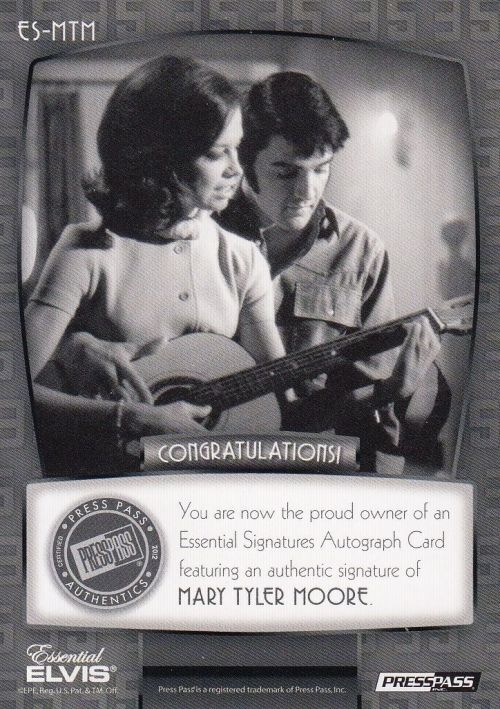 Moore signed for just one trading card company though the years, Press Pass, and those autographs came in the 2012 Essential Elvis set, a higher-end release that showcased the music and film icon’s career and spotlighted notable co-stars. Moore was one of them in the 1969 film Change of Habit.

With that set she signed an undisclosed number of standard autographs along with three parallels — a Gold (/90), Blue (/35) and Red (/10).

Want to learn more about Moore? Check out this piece from The New York Times.