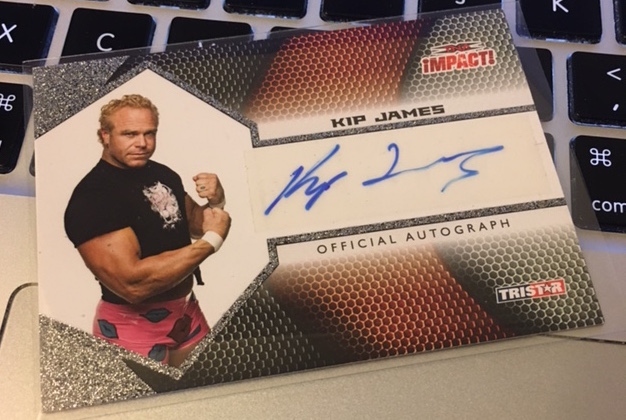 What’s Buzz-worthy: This second TNA release from TRISTAR’s run with wrestling cards is one that offers fewer cards per box but arguably a better-quality release. Oddly, there are no insert cards for this one with subsets built into the main base set. That hurts the Fun Grade in this collector’s eyes but it is a clean and crisp design in the base set. Once that’s built, though, these boxes (originally $19.99 but now sometimes found as low as $5) are all about the ink. Each box guarantees an auto and there are some names to be found — A.J. Styles, Booker T, Angelina Love, Brother Devon, Brother Ray, Christy Hemme, Jim Cornette, Kevin Nash, Kurt Angle, Mick Foley, Samoa Joe, Sting, Tara, Velvet Sky and even non-wrestlers Curtis Granderson, Danny Bonaduce and Hermie Sadler. This box? Well it included Kip James, who’s best known as “Badass” Billy Gunn from his WWE days. You won’t break the bank buying these but there are a few autos that should come out ahead on if you rip with some luck at these low prices. As a collector, you could have some fun, build a set and quickly grab some ink buying up a few of these for the price of one. It’s worth the thought for the price.