It started as a hobby to bring cards that didn’t exist to life — and now it can help bring your legends’ cards into existence.

Tanner Jones is a dedicated Jose Canseco collector who lamented the fact that for years his retired but controversial slugger hadn’t been found on all of the new, creative cards being made — and often not with all of his MLB teams. So he started making cards of his own — and then one day a year ago the idea of his Custom Cuts kits was born.

“I have had so many people ask me ‘How do you do it?’ and I’ve seen the desirability of making your own creations go up significantly,” Jones said. “After thinking about it for a while, I thought to myself people are already acclimated to the thought of cut autos why not cut pictures as well? I played around with the template idea quite a while ago, and then back-burnered it until a few months ago.”

For now, there are just two types of kits available — and they allow buyers a start on making their own cards using their own images or documents, while some have used them to re-purpose components of damaged cards into new creations.

The Nick Swisher card above for example? It’s a creation using a damaged Topps parallel and an autograph sticker from a damaged Panini America card that have been cut and placed into the vertical kit frame. A second option would have been to use the horizontal kit, though the photo cut from the card was too large. The kits are $29.95 per card (free shipping).

Each kit includes a pre-cut and foil-stamped front piece, a cutting template, an adhesive backer and a one-touch magnetic holder that helps you keep your newest card in top shape. For now, there will be just two designs.

“Over time, there will be other designs and configurations,” Jones said. “I want to keep this fresh with people.”

So, why would someone want one of these cards?

“There are plenty of people out there that are of the mind that if a card is not checklisted, it is not collectible and therefore has no value,” Jones said. “With that said, more and more collectors now have an interest in items that go beyond what checklists show. I think this is important, because it adds so much more depth to the hobby we love.”

Personalized cards have been around from companies such as Upper Deck in the early 2000s and Topps in recent years that allow collectors to use their own images in familiar designs and order packs of their own cards, but it’s the memorabilia and cuts mentality that Jones feels is different here.

“Why someone would want a Custom Cuts kit specifically is because of the flexibility of creating whatever you want,” he said. “Do you want a Little League patch card of your son? How about a cut signature card of your great grandfather using an old check and a family photograph? All of these are doable and it is my hope that Custom Cuts makes collecting ultra-personal and exciting.”

And they don’t need to be limited to sports stars — or even people — based on some of the creations he’s seen so far.

“[One was] a cat card where a guy took a picture of his cat and cut up a prescription bottle label.  Another person took a picture of their baby and used a swatch of their pajamas,” he said. “I like one with a picture of my family dressed up to watch Star Wars with a relic of a movie ticket.”

As part of the Custom Cuts website, Jones also has added a tracker where card creators can 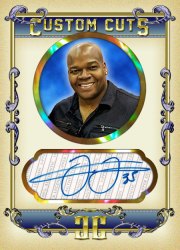 upload their own descriptions using a number provided with each kit. Above is the information for the Frank Thomas card seen here using an autograph that had been scribbled on in an area away from the certified sig.

The licensing of big-league cardboard is big business and Jones knows that, which is why his kits don’t illegally use professional team logos or names.

“They have to spend an unbelievable amount of money for using the photography they do, among other things. If I had that kind of money to get licensing and such, I’d love to be able to make cards myself, but I don’t,” he said. “This is just a fun little hobby for me. Because of this, I’m not selling anything with logos, photos, etc. Custom Cuts probably has more in common with a trading card holder than it does a trading card, until someone creates something for their own collection.”