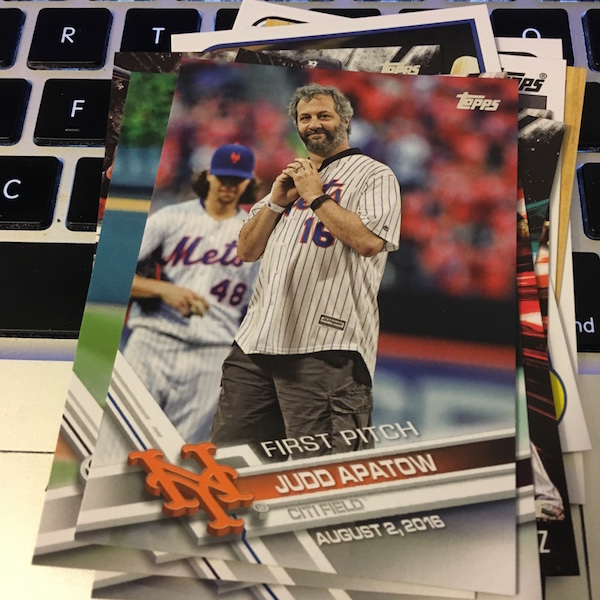 What’s Buzz-worthy: The hobby’s annual flagship release is one that gets plenty of attention and because of that it includes plenty of variety,

surprises and potential for big cardboard. The First Pitch celebs are back and they are relatively plentiful in a box, while a new inclusion focuses on the talents at the MLB Network and they’re found (surprisingly) just one per box. The celebs don’t have ink, but the Network stars do and that’s not the only way you might find ink here. There are autographs on the super-thick Relics (think Five Star) and World Series-winning Cubs inserts — we didn’t find that ink here but we did find a Cub. How thick are the Relics? You’ll get just three cards in that pack when you pull one. One thing you probably won’t find are a number of short-printed variations — there are some in this release but they seem to be scaled back and aren’t easy pulls — and that’s a plus. (Some may not like the hit they take on case breaks when it comes to re-sale but collectors may think less is more after several years of hunting.) The parallels seem to be downplayed here — just three serial-numbered cards and four Rainbows — which is probably in part due to the design being closer to full-bleed for the second consecutive year. Also a plus if you ask this collector. One interesting feature is adding the players’ Twitter and Instagram handles onto their cards — or a #toppsbaseball hashtag to add to the discussions if they don’t have them. All in all, this one feels like a definite improvement on last season and it seems that the hits and inserts are a tad stronger, too. This particular box wasn’t the flashiest in terms of who we pulled but it shows that there’s plenty to see here. Check out the massive gallery below for even more.

Product Grade: A-
Box Grade: B+
Fun Grade: A

Win a box: How can a sealed hobby box be yours? Leave a comment telling us your favorite card  or insert set in 2017 Topps and we’ll pick a winner from all answers received before March 1. Include your email address and Twitter handle if you have one as those will be the ways we contact a winner. (Don’t worry if your comment doesn’t show immediately. All are held for moderation and then approval.)