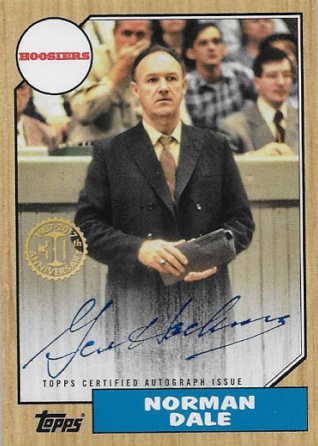 It’s not baseball but it’s the first surprise in packs of 2017 Topps Series 1.

What you see here is an autograph of “Norman Dale” aka Gene Hackman, who was the coach of the Hickory High School basketball team in Hoosiers.

How rare will this autograph turn out to be? It’s probably one of the toughest ones, though it was on the announced checklist for those who looked closely enough to spot the name. The card has parallels and a 1/1 Birch version just like others in the set — but those aren’t on peoples’ minds just yet. Why? The first copy to hit eBay already has an impressive asking price.

Hackman had never signed a certified autograph before despite appearing on plenty of Topps Superman cards from his time bringing Lex Luthor to life.