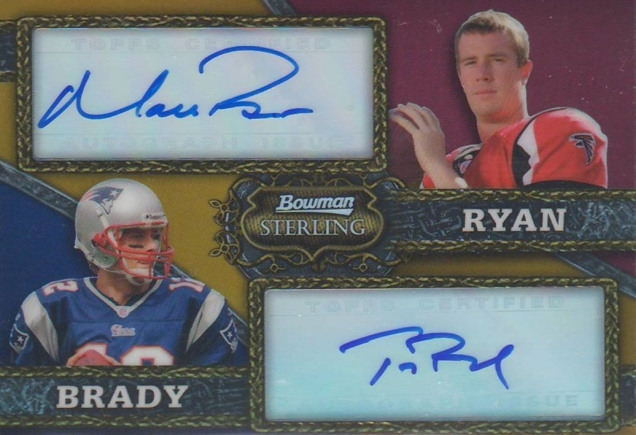 If you didn’t know, Super Bowl LI is on Sunday with the Atlanta Falcons and the New England Patriots facing off for top honors in the NFL — something the Patriots have done four times and something the Falcons have come up short at grasping one previous time.

We all know the household names here and that list starts with the quarterbacks, Tom Brady and Matt Ryan, but we also should all know that this is one of those games where an unknown and cardless player could become a postseason legend like Malcolm Butler two years ago.

So, who else should be on the radar of football collectors already?

Matt Ryan — QB, Falcons
This former Boston College star is arguably the best veteran QB in the NFL today to not have won a Super Bowl — but the likely league MVP gets his shot on Sunday. He threw for a career-high 4,944 yards this season and also had a career-best 38 touchdowns. He made his cardboard debut back in 2008 with 41 Rookie Cards in various brands and has had nearly 6,000 cards since. He’s got nearly 1,400 different certified autos for collectors to chase, too, making him a guy who can be collected for those late to the party.

Tom Brady — QB, Patriots
Unlike Ryan, you are late to this collecting party. If Brady wins his fifth Super Bowl ring he’ll end the debate that he’s not the greatest QB in NFL history. He’s presently tied with Joe Montana and Terry Bradshaw for the most and, while his franchise may not have some of the legendary names that the 49ers and Steelers had, it’s clearly looking like the most-legendary system of them all — and Brady may keep on playing well into his 40s. Many of his 40-plus 2000 Rookie Cards are pricey led by his Contenders RC and his autographs in general are among the priciest for any living NFL player. The Deflategate controversy will be dead and buried with a win, too.

Julio Jones — WR, Falcons
This former Alabama Crimson Tide star has been a force in his NFL career with at least 950 receiving yards in all but one of his six seasons as a pro. In the last two seasons he’s amassed more than 200 catches for more than 3,200 yards but he’s not racked up the touchdowns like other guys. He’s averaged 96.3 yards a game for his entire career and a big game on Sunday will put his cardboard into the upper echelon that it should be at already if it isn’t in spots. He’s got more than 30 Rookie Cards from 2011 and more than 500 different certified autos, which is actually a modest number considering his overall production in the game. 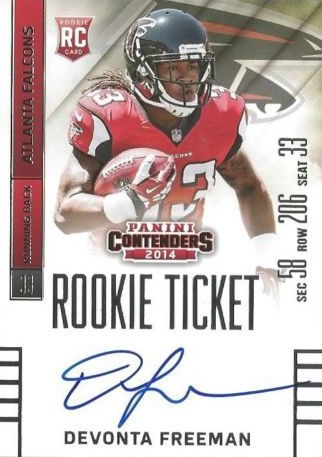 Devonta Freeman — RB, Falcons
This former Florida State star is a relative newcomer to the team compared to others here but he’s posted 1,000-card campaigns and 11 touchdowns in two of his three NFL seasons. That doesn’t happen as much as it used to and he’s also been a reliable receiver with 157 career receptions for 1,265 yards and six touchdowns, helping give the Falcons’ offense some added options. He’s got 30 Rookie Cards and more than 600 different autographs so far in his career, making him an available option for fans.

Tevin Coleman — RB, Falcons
The Falcons’ running game was enhanced by this guy, who had eight touchdowns and 520 yards rushing on 118 carries this season. He didn’t start any games but the duo of him and Freeman are to many one of the best tag teams in the game. He’s probably the least-wowing Falcon on this list but that could mean potential for his 40 Rookie Cards and and more than 650 autos from 2015 and beyond if he has a big game.

Vic Beasley — LB, Falcons
We know people don’t collect defensive stars like they used to, but Beasley’s 15.5 sacks led not only the Falcons this season but also the entire NFL. He’s the lone member of the team to register among league leaders in key stats on defense and he also tied for the league lead in forced fumbles with seven this season. This former Clemson star made his cardboard debut in 2015 and has 26 Rookie Cards, nearly 400 certified autographs and just over 30 memorabilia cards for fans to chase.

LeGarrette Blount — RB, Patriots
He’s bounced around the league plenty since making his NFL debut with the Tampa Bay Buccaneers back in 2010 but he’s put up a career year despite starting just eight games. His 1,161 yards and 299 carries are his best marks ever and so are his 18 touchdowns. He’s already got one Super Bowl ring as a Patriot (2014) and a second is a possibility on Sunday. He’s got 21 Rookie Cards from 2010 but interestingly only 94 autographs and nine memorabilia cards since then. (Interestingly, all of those mem cards are from 2016 National Treasures Collegiate.) 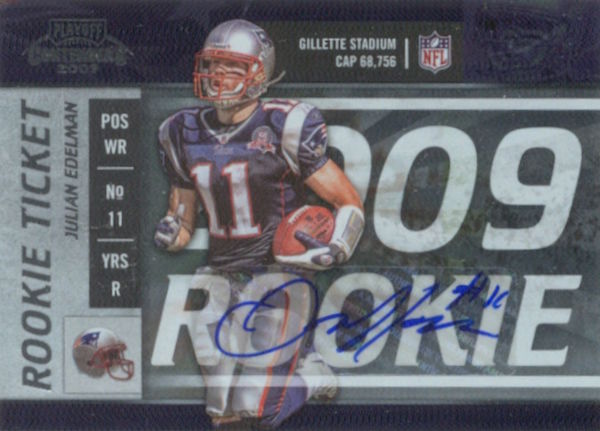 Julian Edelman — WR, Patriots
He’s been on cards since 2009 but has fewer than 1,000 different cards to show for it. That’s odd given his successes in the league. He put up more than 1,100 receiving yards this season — the best of his career — and has had 90 or more catches in three of the last four years. He’s got just eight Rookie Cards from 2009 — Gridiron Gear, Exquisite Collection, Contenders, National Treasures, SPx, Topps Platinum and Ultimate Collection. Even more surprising? He has just 23 certified autograph cards.

Rob Gronkowski — TE, Patriots
He’s arguably the NFL’s best-known meathead and that’s a persona that he definitely fosters. You won’t see him in uniform on Sunday due to injury, but he’s arguably the biggest name on the team not named Brady. Fun trivia? There are four Gronkowskis that appear on football cards but it’s only those of this guy — 36 Rookie Cards from 2010 and nearly 700 autos overall — that matter.

Logan Ryan — CB, Patriots
The team’s leading tackler, Ryan is here merely because he barely registers on cardboard. He’s got just four Rookie Cards, 10 certified autographs, zero memorabilia cards and barely 100 different cards in all. That’s a recipe for competition at auction — especially if he’s dominant on Sunday. His RCs are in 2013 Bowman, National Treasures (/99), Prestige and Score — that’s it. His only autos are in 2013 SAGE HIT and 2013 Upper Deck, which shows him during his time with Rutgers.

Bill Belichick — head coach, Patriots
The mastermind behind it all, Belichick has a pair of Rookie Cards in memorable yet forgettable releases — 1991 Pro Line and 1991 Pro Set — from back when he was at the helm of the Cleveland Browns. (That’s kind of sad that the NFL’s biggest coach today is linked to its biggest joke on his first cardboard, but I digress.) He does have 16 different certified autographs, though, and nearly all of them can be found in 2002 releases from Topps, Fleer and Donruss/Playoff. His 1991 Pro Line autograph is, of course, the first.