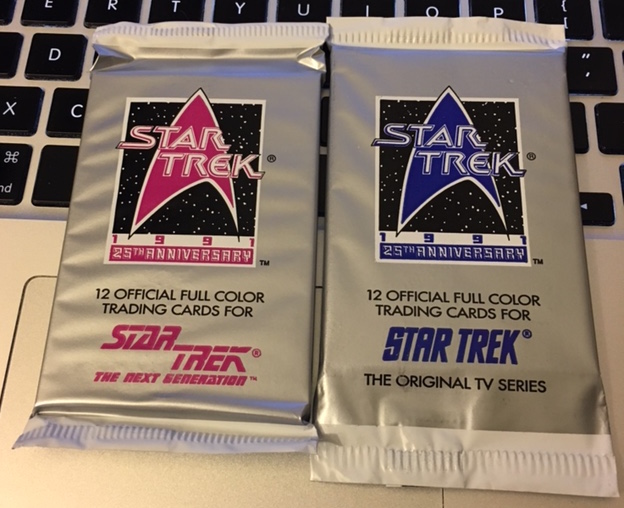 Insert cards: 0 (sample gallery of base cards is below)

Autographs/Memorabilia: None exist for this product

What’s Buzz-worthy: Buzz picked up this box as a potential Buzz 12 in 12 break but held off because of its brutal collation that offers a bit of a look back at the recent past and just how far we’ve come. It’s a 150-card set and each pack of this one includes 12 cards. The sealed box was short on cards (should have had 432) and didn’t even complete a first set, came close to a second and offered as many as five copies of some cards. There are no autographs or memorabilia cards with the lone chase being two holograms. What makes this product still interesting today? One is its packaging format — 18 packs boldly noted as Star Trek: The Next Generation and 18 packs noted as the original Star Trek. Those packs included only what they show while the set is split right down the middle between the two series — odd numbers for the originals, evens for The Next Generation. The highlights here are the basic actor and character cards toward the end of the set — studio portraits perfect for autographs, though you can find certifieds elsewhere — and then there are episode cards and art cards. That’s it in packs. There also was a second series for this release from Impel — it may have been made in lower volume because this collector doesn’t remember ever seeing it — but this one is the memorable one as it was among the first in the “modern era” of cards for TNG, while the original series had a number of sets in the 1960s and 1970s. This one is a fun rip but a messy one. If it’s dirt cheap (far less than $10 — this one was found for $6) then you might consider trying it — there could be some grading challenges and fun here for character cards — but you can probably find the set for less than that.