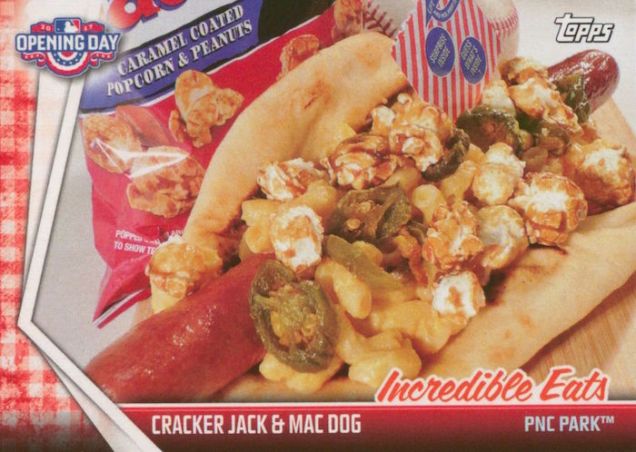 A number of ballpark foods will get their own Rookie Cards in an upcoming Topps baseball card set.

Among them? The Pittsburgh Pirates‘ Cracker Jack & Mac Dog, above, which will be found in packs of 2017 Topps Opening Day alongside other staples when it arrives next week.

One that shockingly didn’t make the cut, though? The Dodger Dog. (No, seriously!) Keep reading to see what creations made the 18-card Incredible Eats insert set in the product.

The Texas Rangers‘ Broomstick Hot Dog, above, gets card No. 14 in the set, while Buffalo Cauliflower Poutine is found in Toronto and on card No. 18. (No word on which one Jose Bautista truly prefers.)

The Rangers also get their Bacon Mac & Cheese on card No. 15.

Other teams with multiple items on the list? The Boston Red Sox lead the way with three items (Italian sausage, cotton candy and the Kayem Fenway Frank), while the other team with more than one card is the Milwaukee Brewers (peanuts, nacho bowl).

Also on the menu? The Cheesy Corn Brisket-acho of the Kansas City Royals (above), the Houston Astros’ Chicken & Waffle Cone and the Washington Nationals’ Corn on a Stick.

What’s included in some of these exotic creations? What makes them unique enough to be tied to a team? We’ll apparently find out when we see their baseball cards.

You can see the rest of them on the checklist below and add card images when they are available. (Click for a closer look.) Meanwhile, 2017 Topps Opening Day is set for a March 15 release.