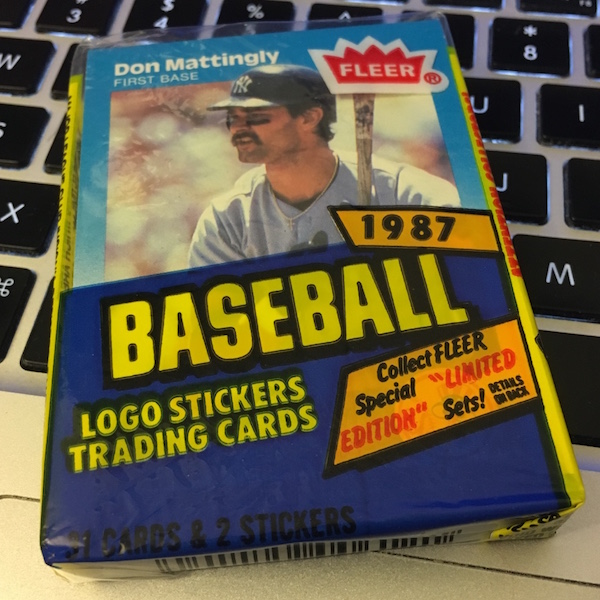 The pack: 1987 Fleer baseball cello pack
The cost now: $2
The cost then: Under $1 … unless a dealer charged more for a Don Mattingly pack.

What’s Buzz-worthy: A 1987 Fleer cello with a Don Mattingly on top? That’s the kind of pack that would often end up in an unopened wax collection since it’s an iconic player who was a star of that timeframe … but not here. This pack was bought to be busted — and thankfully it delivered pretty well. It included a Rookie Card of Hall of Famer Barry Larkin, the Mattingly and a Rookie Card of Ruben Sierra (another star of that timeframe) along with three other Hall of Famers to make this pack impressive — at least to someone who was collecting back then. This set is one of three memorable ones from 1987 and is the home to RCs for Barry Bonds, Bo Jackson, Will Clark and so many others who were a big deal for a decade after this one’s release. Now? Well, it’s a $2 pack — and that’s a fun break if you can find them cheap like this one was. I was happy with this pack even though I could find its key contents quite easily. The lesson here is that it doesn’t have to be an expensive rip to be a fun one. This is a good set from a key time in the life of the hobby and that’s one reason why it’s busted right here.

Product Grade: A
Pack Grade: A
Fun Grade: A (because of the results)