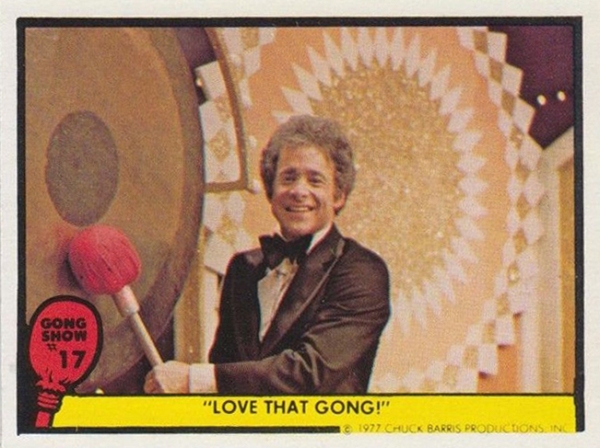 He was a hit songwriter, the creator of several memorable TV shows, a novelist and maybe, just maybe, a C.I.A. assassin.

He was Chuck Barris and he died on Tuesday at age 87.

Among his hit creations on TV? The Dating Game, The Newlywed Game and The Gong Show, which is where his cardboard career comes into play to a limited degree.

Also among his credits is Confessions of a Dangerous Mind, a 1984 book that became George Clooney‘s directorial debut in 2002 — a tale too good to be true but we still don’t know for sure that starred Sam Rockwell, Julia Roberts, Drew Barrymore and Clooney.

The Gong Show is probably what he’s best known for — a “talent” show where guests could perform as long as they weren’t pushed off the stage by a member of a celebrity panel tasked with banging a gong if they just couldn’t take any more. The show launched in 1976 and Barris was host until 1980.

Early on in this run, in 1977, Fleer produced a trading card set for the hit show — 66 cards showing zany moments from the show and 10 stickers doing the same. You can still find wax packs for about $3 and sets for modest amounts given their age.

His New York Times obituary shows that there was much more to Barris than gongs, though it, too, has a legacy in today’s reality TV landscape. An excerpt:

“When you go to that great game show in the sky,” he asked himself, “would you rather be known as an author or as a TV game show producer?”

“That’s the easiest question of all,” he responded. “I would love to be known as an author, but I don’t think it’s written that that’s the way it’s going to be. I think on my tombstone it’s just going to say, ‘Gonged at last,’ and I’m stuck with that.”