What’s buzz-worthy: The burlap is back for another run this year as Topps revisits 1968 for an update edition of Heritage with much of the same formula that has made it a hobby staple for the last 16 years.

The Basics: The basic set will consist of 225 cards with the last 25 of them being short-prints found one in every three packs. There will be new rookies and traded veterans found here with each of the base cards having Gray back parallels (/10), Bright Yellow back parallels (/25). Blue parallels (/50) and Flip Stock versions (/5). A selection of 100 cards also will get the mini treatment. The Chrome rainbow will include standard cards, Refractors (/568), Blue (/68), Gold (/5) and 1/1 Refractors and there also will be Hot Boxes with their own Refractors one per pack. Adding to the chase here will be variations that echo the first series — error SPs, traded variations, throwback uniforms, action images and color swaps. The last two will be hobby-only creations.

Among the hits will be Clubhouse Collection Auto Relics with 1/1 patch parallels along with dual auto Relics that also will have a 1/1 version. Real One autos will once again have a Red parallel limited to no more than 68 copies along with duals, 1968 Poster autos (/10) and a set of Nolan Ryan Highlights Autos where cards are limited to only five copies apiece. This is a new addition for the High Number series. … Relics will continue here with Clubhouse Collection Relics having Gold (/99) and 1/1 patch versions along with duals, triples and quads. They, too, will have 1/1 patches. Also 1/1 creations in this one will be cut autos for both past baseball players as well as celebs from the time. … Inserts will include Rookie Performers, Then & Now, Combo Cards, Award Winners and a new Nolan Ryan Highlights set that uses the design from his Rookie Card year of 1968. Those will be hobby-only inclusions. Hobby box-toppers will include posters (/50), ad panels and buybacks.

Retail details (update): The Bazooka inserts will be back at retail only with 250 copies per card this time, too. … Retail pack options will include eight-pack blaster boxes, 35-card hanger boxes and 20-card jumbo packs. 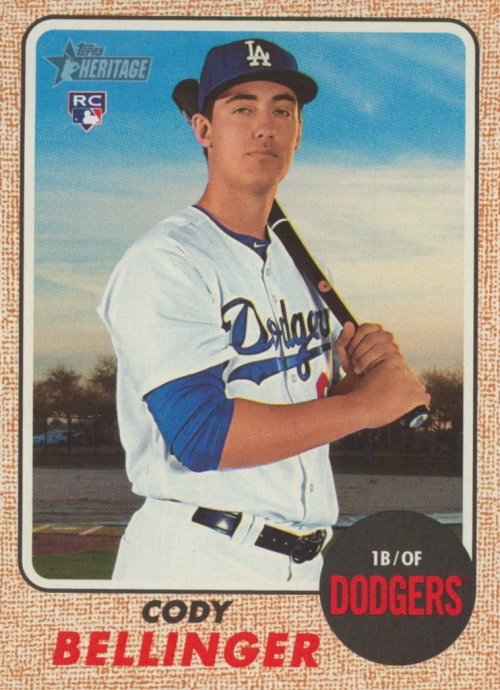 Variations update …
The variation lineup of Actions, Throwback uniforms, traded players, errors and color swaps are back. If you land a card with a black circle, it’s a swap. Their batch codes end at 49. Complicating things are the error variations that end in 45 — they have team names in white instead of two colors. The Bellinger with Dodgers in white in the gallery is the rarer version. … Traded player notation variations (46) are also back and can be found for Yovani Gallardo, Logan Forsythe, Reynaldo Lopez, Brandon Phillips, Dan Straily, Drew Smyly, Jose DeLeon, Matt Wieters, Edwin Encarnacion and Aroldis Chapman. … Throwback uni variations end in 47, while Actions end in 48. A sampling of these can be found in the always-growing gallery below.