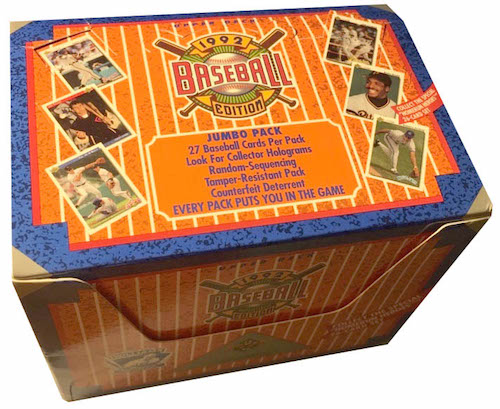 Do you like Buzz Breaks? Today’s your day then as we launch 12 in 12 — a series of a dozen breaks of past wax boxes and wax packs in a dozen hours. We’ll post one every hour on the hour all day long today … this is our finale.

What was found inside this one? Keep reading …

Packs per box: 20
Cards per pack: 27
Cards in this box: 540
Base set completion: Sorry … not sorting this one! (Set was not completed.)
Duplicates: Plenty. 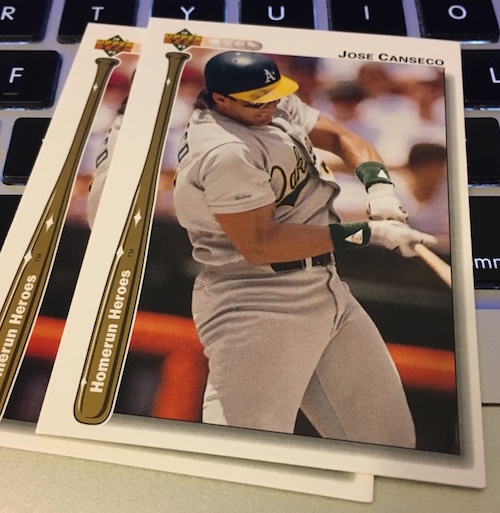 What’s Buzz-worthy: I’ll call this one the calm before the storm — the last of the early Upper Deck years to release with a meaty main set and a 100-card update set while living in a gloss-free world. Things changed dramatically the following year. The basics are the same — strong photos, simple subsets and a few inserts. It’s not super-flashy and has very few true Rookie Cards, but it got the job done in its time. The Home Run Heroes are one per pack, while we found a third of the Ted Williams Baseball Heroes set here but, alas, no Ted Williams autograph. (Shocking!) The packaging for the jumbo packs may be safer here all these later — I also opened a standard wax box and all cards on top and bottom had pressure indentation from the wrapper’s sealing panel. That meant all insert cards were damaged along with some base and those that were heavily glossed also stuck to other cards a bit.  That one was a miserable ripping experience, though it may not happen in all instances. Meanwhile, this jumbo experience was smooth and flawless save for some corner issues on some cards. That’s not bad for 25 years of waiting to be opened. Fun piece of 1992 Upper Deck trivia — a cameo on David Justice’s Braves team checklist painting created by Vernon Wells shows the artist (in white cap, photo above) doing the team’s chop along with his son, Vernon Wells III, who would be on his own big-league cardboard beginning five years later.

Product Grade: B-
Box Grade: B
Fun Grade: B-

What do you want to see next time during 12 in 12? Tell us in the comments or on Twitter. We’ll mix in more full boxes and newer stuff if we see that you like it. If you made it this far, thanks for checking out The Buzz all day.