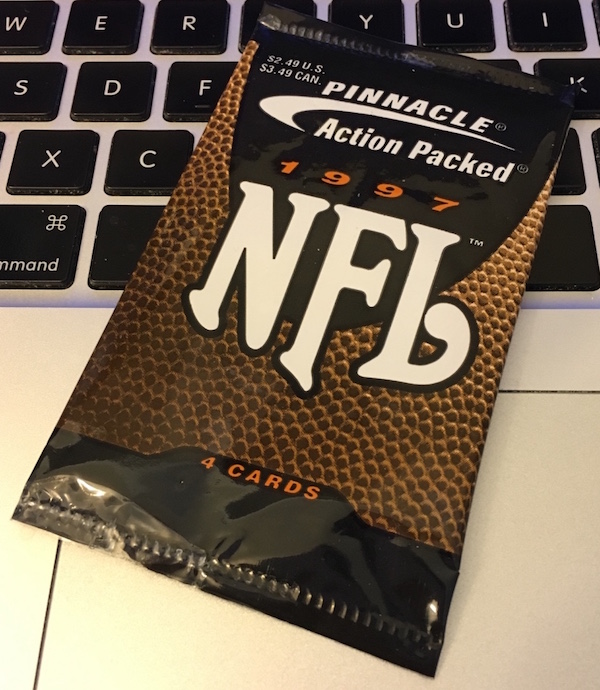 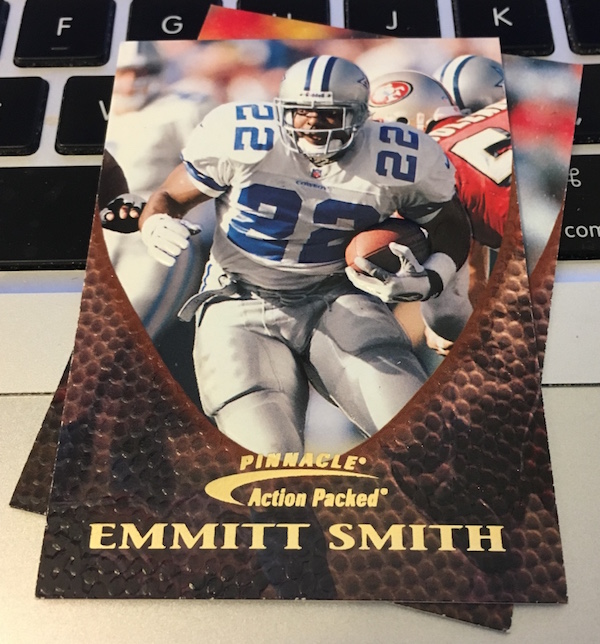 What’s Buzz-worthy: When I found this box at a small card shop, I did a double-take but left it on the shelf not sure what it was — it was a lidless box in shrink-wrap (meaning a retail box typically sold via magazine vendors) from an era of NFL that this collector didn’t dabble with much. (In other words, it was the college years — that $2.49 was for lunch … all week!) On a later visit, I picked this one up for a cheap rip and it turned out to be very Buzz-worthy. … First, a history lesson: This was the final release for the brand — it’s only been seen twice since then as an insert set — under the previous owners, Pinnacle. Pinnacle picked up Action Packed back in the day and it was scooped up by Donruss/Playoff, whose trademarks are now owned by Panini America. These embossed cards aren’t like the early years where a card was really a three-panel card folded and glued closed to have a smooth back. Instead, these cards are just embossed where the fronts are raised and the backs are indented. It’s a move that makes these a bit tougher to sort. … Now on to this particular box. Each pack doesn’t include much and each of them included a plug card with a hole cut into it. It explains on the card that it’s a Studs protector card and that the odds for those cards is one in every 209 packs. A few packs in, I discovered what that was — and why. Studs are a card reportedly with a genuine diamond chip glued onto it (also only 1,500 made), though there’s no notation of it being a diamond anywhere on the card. This wasn’t the only big pull as the box also included a 24 KT Gold card (1:89), a Gold Impressions card (1:44, so every other box) and the appropriate number of other inserts and parallels. A set wasn’t completed in this one, but it was a star-powered box that was actually pretty fun for a box from that timeframe. It was a big win for $9.99. The printing here is pretty cool, though many of the base cards have chipping issues. All in all, this was a pretty sweet break for the price and it’s something Panini America should consider revisiting in its full embossed glory.

Product Grade: A-
Box Grade: A+
Fun Grade: A