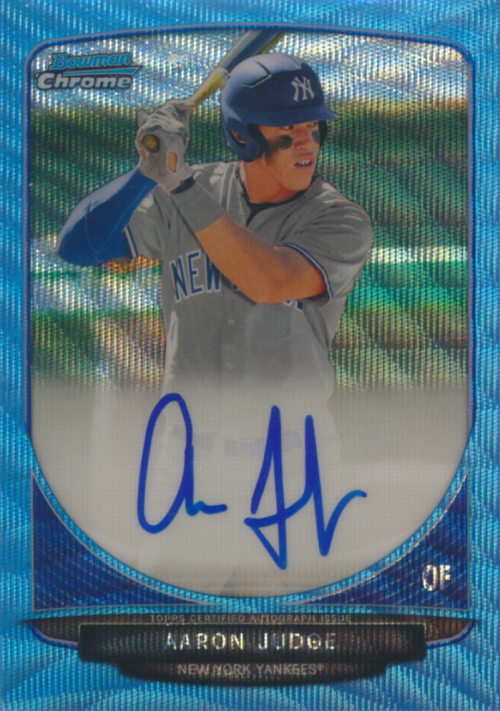 What happens when a New York Yankees rookie hits his league-leading 12th home run of the season?

Aaron Judge is that Yankee and thanks to several years’ of prospecting sets and his 2017 Rookie Card arrival he’s arguably the hottest cardboard in the hobby today. As we documented here on Monday, he’s got more than 400 different autographed cards already — and there’s undoubtedly more on the way — and that’s a good problem to have.

But what if you don’t have a Judge auto? Where should you start? Consider these 12 sets or specific cards …

His First Topps Heritage MLB Auto
If there’s one segment of baseball card world heating up unlike any other of late, it’s the demand for key cards in the Topps Heritage canon. You could easily argue right now that Judge’s 2017 Topps Heritage autograph is the latest “key” to consider. This card, ungraded, has topped the $200 mark in completed auctions is flirting with the $300 plateau among actives. Asking prices for Buy-It-Now sales are higher as are graded copies — and then there’s a rarer red-ink version. Whew.

His First Chrome Auto
If you could turn back time for many collectors to hoard Judge autographs hard, the date would be 2013 and the product would be 2013 Bowman Draft. This card and its rainbow of parallels  is the one that most are chasing hardest. Don’t believe me? Click here. The completed auction results are also lofty and impressive. More impressive? Wax for this brand is still available. Clearly, he’s not in every wax box — but he’s still out there.

The Chrome Alternative?
Judge’s 2013 product appearances are extensive with a number of prospecting products from that year from a few companies but his 2013 Bowman Sterling appearance is one that could still have room to grow — but it’s not a simple equation here. Statistically, Judge should be an easier pull here than in Bowman, but the brand is a higher-end release. (Though boxes aren’t cheap for either brand at this point.) His Sterling rainbow includes nine cards and he also has a dual here. 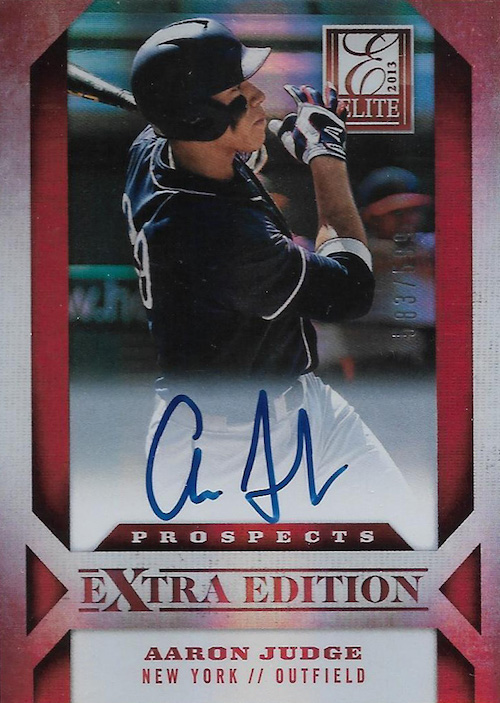 The Easier Non-MLB auto?
Judge has a ton of 2013 prospect autos from non-Bowman brands and his 2013 Elite Extra Edition auto has a rainbow that starts with a basic card numbered to 599 copies. Including parallels there are plenty of Judge autos in this product and wax is still reasonably available considering that each box has at least six autographs inside — and sometimes more thanks to Hot Boxes. Even Buzz pulled one of these — well before it was selling at its current levels.

Another Non-Yankees Alternative
Judge appears in a number of Leaf Trading Cards releases but one could argue that his 2013 Leaf Metal autos might be the best bang for the buck — if you can find them. Boxes are ultimately probably long gone because of people ripping for that Kris Bryant guy, but you can find singles. You can also bet these will have shorter print runs than some other brands.

Also Consider Bowman Inception …
Judge was a constant appearance in Topps’ Bowman Inception lines of the recent past. He’s got roughly 50 different cards between all parallels and cards in his releases from 2014 to 2016. If you want an MLB-approved Judge auto on the cheaper side, this might be the place to look — and you can still pull him, too, as the boxes can be found. Asking prices on the rare cards are steep — not a surprise — but the more-standard stuff isn’t as pricey.

The Rarer College Appearance
College baseball has gotten more exposure than ever on cardboard in recent years thanks to Panini America’s licensing portfolio and its focus on using that as part of its prospecting brands. Judge’s Fresno State Bulldogs days are found on some cards out there, including this 2015 Panini Contenders auto. For the fan who wants a collection focusing on all aspects of a player’s career, this is a must-have card. Compare active eBay auctions — they’re scarce if there at all — and consider that wax can still be had, and there’s some compelling thought about potential here.

The “Other” Heritage Auto
Judge’s 2017 Topps Heritage auto would be atop this collector’s want list right now, but it’s not his first. Thanks to those last few years in the minor leagues, Judge has a number of appearances in Topps Heritage Minor League sets from 2014 to 2016. Only one, though, has autographs. Just 80 sigs total were placed into packs of 2015 Topps Heritage Minor League with all of them being Clubhouse Collection Auto Relics — a standard card limited to 50 copies, a 1/1 Black parallel, an Orange version (/25) and four printing plates. Yes, it’s a sticker auto, but it’s one that’s different from many other Judge cards out there and, again, it documents a different time in his career than most cards.

Forgotten Rainbows?
Panini has retired Prizm from its baseball lineup for the time being, but Judge can be found in a pair of past Prizm products. His first autos are in 2013 Prizm Perennial Draft Picks, while a seven-card rainbow (one card above) is in the 2015 Panini Prizm release, which might be the best Prizm release of them all. The 2015 rainbow includes a standard card and six others all rarer than 125 copies. These are likely tougher to find than Bowman Chrome autos — but also less expensive. That should make them one to consider. The 2013 autos have steep asking prices just like other Judge ink but might not be as easily found.

A High-end Option
Judge has 15 cards in the 2015 Panini National Treasures release and 14 of those are autographed. The Prospect Silhouette card here is one of nine of those cards (counting all of its parallels) and other than a missing “NY” that’s a card that should be impressive to many. Prices on these are undoubtedly picking up steam now vs. past sales of cards from the release and there aren’t that many to go around. Combine that with their somewhat-limited distribution — only a few cards per box in a high-end brand — it’s an interesting card to think about. (Sleeper? Rarer than you might think? Undervalued on market?) I’ll leave those questions up to you.

An Instant Throwback Classic
The 1987 Topps inserts in 2017 Topps Series 1 are crisply and cleanly produced and Judge has four autos (a standard and three parallels) in that release. No matter what they sell for — and that number ain’t bad at all right now — this is a nice card. Period.

One of Several 2017 Rookie Autos
Judge’s Rookie Card arrival this year also has included a number of autographs from both Topps and Panini America and you can expect plenty more to come now after his historic April and a hot start. One of those cards — also one that’s selling very well right now — is his 2017 Topps Gypsy Queen auto. The revamped product isn’t perfect but this card just might be.