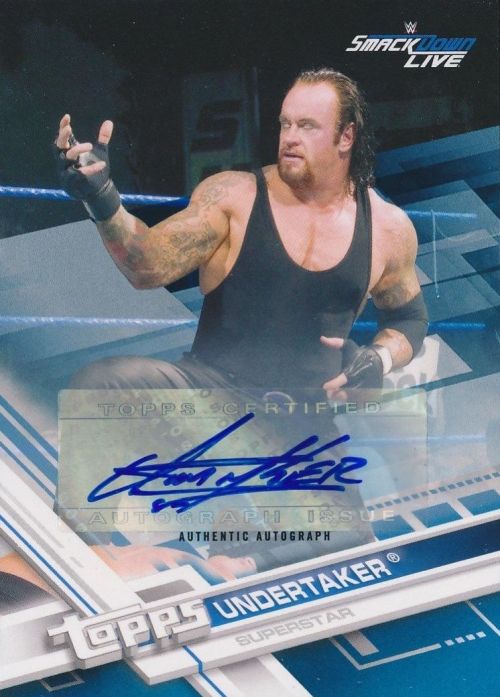 The Deadman has hit eBay.

The first Topps autographs signed by future WWE Hall of Famer Undertaker — just the third certified autographs of his career — have arrived in boxes of 2017 Topps WWE and the asking price for the first card to hit the auction site has a jaw-dropping Buy-It-Now price.

The Blue card still seems like a bargain at $999.99 or best offer. Why? It’s limited to just 50 copies and his previous autographs can command big bucks, too. Why? He’s not done many signings or appearances in the past and has shown that he’s just not interested in signing in general. It should be relatively obvious when this is his first certified autograph card in 16 years — and he’s been largely unavailable for even WWE’s signed products in the last decade, too. The last time he signed for a card company was the 2001 Fleer WWF Raw is War set — yep, WWF, it’s that long ago. His only other auto came in 1994 Action Packed WWF when he signed 500 cards.

We don’t know if Undertaker signed all colors of autographs in this release or whether he just signed for parallels — or if his standard autos are shorter than others. We’ll know as more arrive — or don’t arrive — on eBay. So far, just Silver and Bronze versions have been posted.

What we do know is that his low-volume ink will also be found in 2017 Topps WWE Undisputed (June 23) and 2017 Topps WWE Heritage (Aug. 2). There’s potential for more after that but only those three were noted by Topps at the time of his signing.

Update: The first card to sell on eBay was a Silver parallel limited to 25 copies. Its owner accepted a $450 offer for the card.