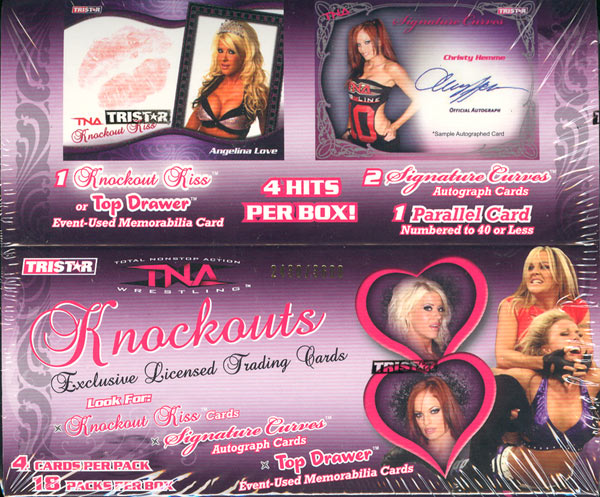 Do you like Buzz Breaks? Today’s your day then as we launch 12 in 12 — a series of a dozen breaks of past wax boxes and wax packs in a dozen hours. We’ll post one every hour on the hour all day long … and this is Hour 4.

What’s Buzz-worthy: With just 3,600 of these hobby boxes made — and each one of them is serial-numbered — this is really a brand you just won’t see all that often. This was one of only a few women’s wrestling sets made in the 2000s, and, until Topps released its Divas Revolution set last year, there hadn’t been any since this one. This set spotlights the female stars of Total Nonstop Action Wrestling at that time — aka The TNA Knockouts — and it’s a small roster with some decent names in the wrestling ranks but not a lot of names who are known beyond wrestling (squared) circles. This box delivered pretty well with a Christy Hemme Top Drawer memorabilia card, which is arguably the best of the five in that 18-card set that were found with a bonus autograph. She had a short WWE run that also included a Playboy appearance, so she might be the best-known of those on cards here. A short-printed Dixie Carter auto isn’t a bad find, either, as she was the president and chair of the company until it was sold earlier this year. The box over-delivered thanks to the Hemme auto as each is supposed to deliver just two inked cards, one parallel and either a kiss card or a memorabilia card. Awesome Kong wasn’t a bad third auto as she wrestled in Japan before coming to the American ranks. She’ll next be seen in Netflix’s series GLOW coming June 23. The base set here is made up of several subsets — and a few are pretty cheesy — but it does a decent job of telling the story of the promotion’s stars in and out of the ring, past and present.

Product Grade: B
Box Grade: A
Fun Grade: B+

What’s next? Be back at the top of the next hour …