Your next big-name New York Yankees rookie to arrive in The Big Apple will face big expectations — but he doesn’t have nearly as much cardboard as those who arrived before him.

Unlike the arrivals of Gary Sanchez and Aaron Judge — guys who had plenty of baseball cards and plenty of certified autographs when they hit The Show — shortstop Gleyber Torres doesn’t.

And that could bode very well for collectors who own them. 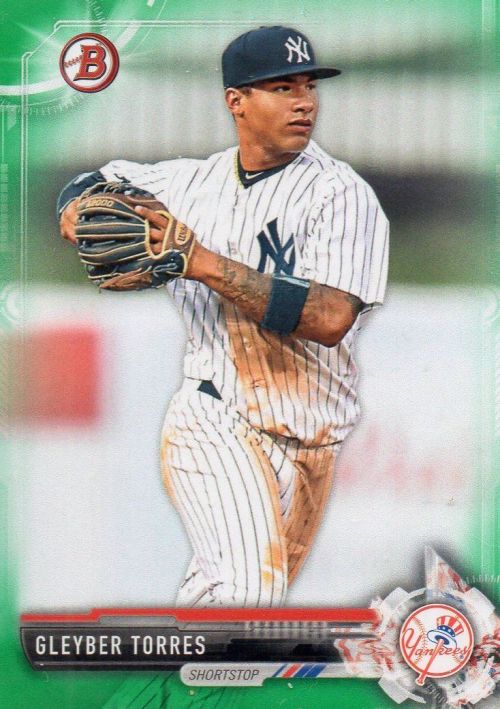 Torres has appeared on baseball cards since 2013 but has fewer than 350 total cards and roughly 100 different certified autographs. Meanwhile, Judge arrived that same year and has more than 1,000 different total cards and nearly 450 different certified autos. Sanchez, who arrived on cards back in 2010, also tops 1,000 cards but has a more modest number of autos at roughly 150. These are all numbers that should reinforce cardboard demand to come as long as Torres delivers when he arrives — and asking prices on his key cards are strong already.

There’s one difference between these three players in that Torres wasn’t a home-grown Yankee, meaning his first Bowman autos show him with the Chicago Cubs — the team that traded him and three other players for Aroldis Chapman last year. That’s something that means he has even less pinstriped ink — but don’t worry, there will be more to come.

Here’s a rundown of Torres’ key cardboard locations so far …

The Debut
Torres’ first autographs can be found in 2013 Elite Extra Edition from Panini America where he has nine cards. His standard auto is just 250 copies with its parallels numbered down to just one copy. Even here he’s much rarer than Judge, whose basic auto card is limited to 599 and includes a rainbow atop that. Torres’ entire rainbow totals just 476 autographs in the entire product. His unsigned cards in this one are his only standard cards made in 2013 — and he appeared on nothing other than potential team-issued minor league cards in 2014, too.

The Bowman Arrival
Torres’ first Bowman autos arrived in 2015 Bowman Chrome where he appears on 14 cards in the standard Bowman rainbow and then a trio of Bowman Black cards found in 2015 Bowman. The Black trio amounts to just 40 autographed cards, while the Chromes include standard autos along with Refractor (/499), Blue (/150), Blue Twitter (/3), Gold (/50), Green (/99), Orange (/25), Purple (/250), Red (/5) and a 1/1 Superfractor along with printing plates. For unsigned cards, he’s also found in Topps Heritage Minor League.

More 2015 Autos …
Panini America also included Torres in its 2015 Elite Extra Editon and Panini Contenders releases where he appears on a total of 35 different cards between the two brands. While some cards in these releases are not serial-numbered, just two of those that are numbered are over 100 copies. The rest are quite low with 24 of them limited to no more than 25 copies per card. Those are tougher pulls — and that should help values. They could also be considered sleepers when comparing values to some other cards.

What about 2016?
Torres can be found in 2016 Bowman Inception (seven autographs), Bowman’s Best (two autos) and on 11 in the perhaps-overlooked Topps Pro Debut. In Inception he has one un-numbered auto while the rest are 150 copies or less. (Meanwhile, Judge was on a full rainbow of Inception autos for three years in a row.) The Bowman’s Best appearances come on Baseball America Prospect Forecast cards — a standard card limited to 50 with a 1/1 parallel. That’s it. These are his first autographs in a Yankees uniform but they’re tough pulls. In Pro Debut, he’s got a few cards but none are over 50 copies and eight are limited to five copies or less. A but easier are his cards in 2016 Onyx Platinum Elite — a rainbow of a few colors that seem plentiful for now. Beyond just autos, his cards can also be found in seven Bowman releases as well as Topps Heritage Minor League.

The First (Easily-Found) Yankees Ink
Torres’ first widespread Yankees autographs arrived this year with 2017 Bowman where he’s got 19 autos across the total rainbow. Meanwhile he’s also got four autos in 2017 Panini Diamond Kings and three in 2017 Topps Pro Debut, which is set to arrive on Wednesday. His Diamond Kings autos are tough pulls with the easiest being just 25 copies. Expanding things to include all cardboard, Torres also can be found in 2017 Donruss but there’s no doubt that he’ll have more cards to come this year.

Coming soon?
Interestingly, Torres doesn’t yet appear on a single game-used memorabilia card so that’s something to look forward to in the future. His first Rookie Cards could arrive late in this year’s releases after his big-league debut if it comes sooner than later. If not, he’d be a prime 2018 RC if he debuts late in this season. Between now and then, though, you can bank on a Topps Now card or two if he arrives with a bang as expected.