Cortez Kennedy was a mainstay for the Seattle Seahawks for 11 seasons, starting 153 of 167 games every year beginning in 1990.

Along the way, Kennedy signed just two certified autograph cards for a trading card company and did just one more signing after he was enshrined in the Pro Football Hall of Fame in 2012.

The 48-year-old died on Tuesday, according to the Orlando Police Department. 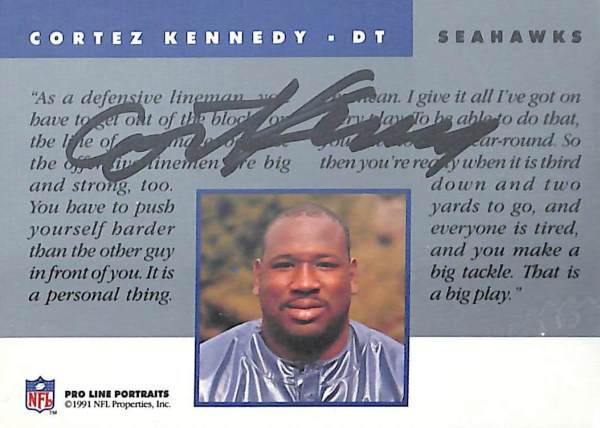 His only cards signed during his career for the 1991 Pro Line Portraits and 1995 Pro Line sets, which helped make autographs more commonplace in boxes. While the 1991 card is not numbered, the 1995 card is limited to just 1,380 serial-numbered copies. His only other autos are from the 2012 Panini America Hall of Fame promo set, which had some cards inserted into Black Friday packs and thens one inserted into 2013 Panini National Treasures. 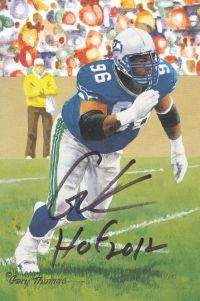 One autographed card formally released but not in packs is his 2012 Goal Line Art card, which is an oversized release. He signed a limited number of the cards directly for the Hall of Fame.

Drafted third overall out of the University of Miami, Kennedy appears on a handful of Rookie Cards from 1990 releases — Action Packed, Fleer Update, Pro Set, Score, Topps — and in Topps Tiffany, Topps Traded and Score Supplemental sets, too.

Even rarer than those autos or Rookie Cards are his appearances on game-used memorabilia cards where he has just three. All of them arrived in his final season — 2000 Bowman Reserve and 2000 Topps Stars where his Pro Bowl jersey made the cut. His only other one is a 2000 Pacific Omega card, which would be his only Seahawks jersey memorabilia card.

He’s one of only four former Seahawks Hall of Famers who spent most of their careers with the team. The others are Steve Largent, Walter Jones and Kenny Easley. He had his No. 96 retired by the team and is a member of its Ring of Honor.

“Really sad to lose a guy like Cortez Kennedy,” said former Denver Broncos QB John Elway on Twitter. “A great personality, a great player and I enjoyed competing against him. Prayers to his family.”

For more on his life and career, check out this piece from The Seattle Times.