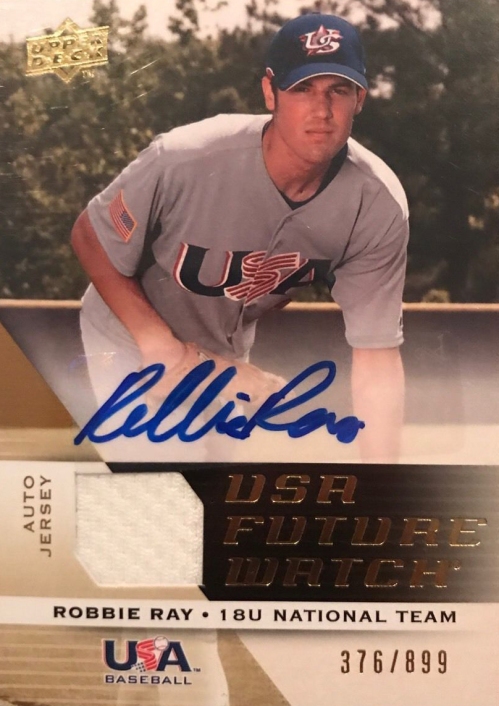 Which card do you chase when there’s a player on a hot streak and emerging from the pack — but when he doesn’t have much ink?

This collector would lean toward the earliest.

That player is Arizona Diamondbacks pitcher Robbie Ray, and he’s a guy who posted an 8-15 record last season — but with 218 strikeouts, a mark that was fourth-best in the National League. 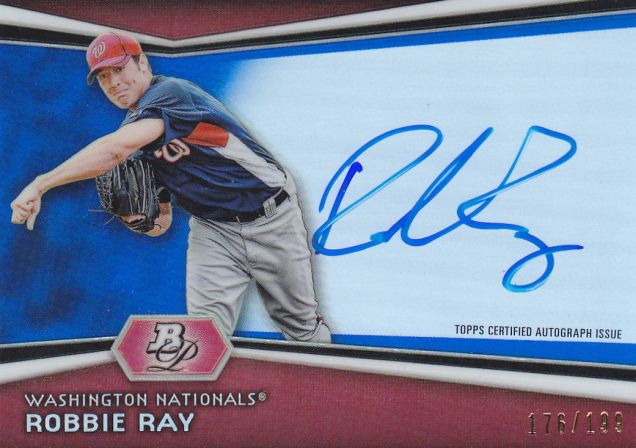 He’s 5-3 with a 3.00 ERA and 84 strikeouts in 69 innings — strong but not invincible numbers — but it’s his last three starts that are impressive and an indicator that things are finally going well. His last start against the Pirates? A shutout with four hits and 10 strikeouts. Before that? Seven scoreless with just two hits and nine strikeouts. Before that? Seven-plus shutout innings where he struck out six and walked three — his only walks in this stretch.

On cardboard, he’s been elusive in recent years — he’s not had any autographs in the last two years and barely any in 2015 (just two, a total of 26 sigs). You have to step back to 2009 for his USA Baseball autos to find ink in volume and then in 2014 where he’s got just three Rookie Cards (Classics, National Treasures and Topps Update). Overall he’s got just about 80 different certified autos.

His first cards came in the 2009 wave of Upper Deck USA Baseball cards — Signature Stars and the annual boxed set. After that, he appeared on signed cards in 2011 Leaf Metal Draft and Leaf Valiant before his first MLB prospect autos in 2012 Bowman Platinum and then his first official MiLB cards in Heritage Minor League. That’s it. He’s got nothing in 2013 brands before Panini America put him in its 2014 lineup — Classics, Donruss The Rookies and National Treasures. Since then he’s had just two autos — a 2015 Bowman Chrome Bowman Scouts Top 100 card (/25) and its Superfractor parallel.

If his dominance continues — with stats that look unquestionably dominating at season’s end — this relative lack of cards could create some good money-makers.