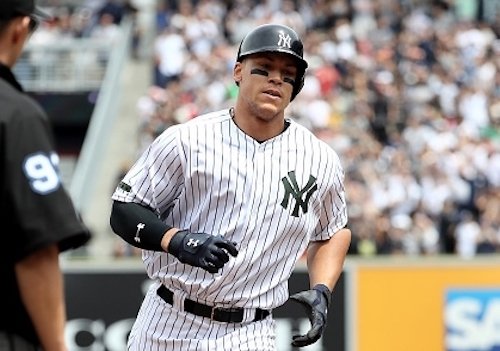 How priceless are the pinstripes of the hottest New York Yankee?

We’ll find out soon as the game-used jersey worn during Aaron Judge‘s first career grand slam from May 28 is on the auction block.

This jersey is a bit different than other Yankees game-used gear as its patches are green for Memorial Day with a five-star patch added to its right sleeve.

The auction opens at $10,000 as part of Steiner Sports Auctions‘ Memorial Day weekend premium sale active now until just Sunday. It has yet to garner an opening bid.

Judge’s jersey isn’t alone as other players’ gamers from that showdown against the Oakland A’s also are for sale — Gary Sanchez, Michael Pineda, Didi Gregorius, Brett Gardner, Matt Holiday, Starlin Castro, Aaron Hicks and Chris Carter are on the block. Some of those open for bidding for as little as $500.

Part of proceeds from the Judge auction will be donated to the Special Operations Warrior Foundation, which “ensures full financial assistance for a post-secondary degree from an accredited two or four-year college, university, technical or trade school, as well as family and educational counseling, including in-home tutoring, to the surviving children of Army, Navy, Air Force and Marine Corps special operations service members who lose their lives in the line of duty.”