He’s not exactly a come-from-nowhere player, but the power is coming through for one Boston Red Sox minor-leaguer.

Michael Chavis hit his 14th home run of the season Sunday for High-A Salem — and actually his 13th, too, since it was his third multi-homer game of the year. That’s just two-shy of his career-high from two years ago in 109 games.

He’s hitting .343 through 47 games (so that home run pace looks even stronger) and the good news here is that he’s just 21 years old since he was just 18 back in 2014 when Boston took him with the 26th overall pick. 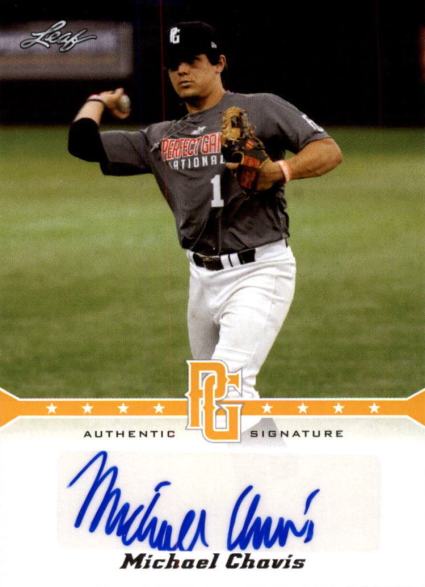 Thanks to that first-rounder status, he’s got more than 130 different certified autographs to chase since his cardboard debut in 2013 — that’s the year he was found in Leaf Trading Cards‘ Perfect Game Showcase release.  (That one has an autograph in every pack — click here to see a box break.)

Chavis’ first Chrome and MLB-approved autos can be found in 2014 Bowman Chrome Draft where he’s got a full rainbow and also a Draft Night auto (/15) and Dual Draftees autos with Michael Kopech. He also made an appearance in Bowman Sterling, Elite Extra Edition, Leaf Metal Draft, Leaf Trinity, Leaf Valiant and Panini Prizm Perennial Draft Picks from that year.

He made one more appearance in 2015 Bowman’s Best where he had a few cards but he’s not had a certified autograph released since, something that could perhaps help interest in his cards if this strong season continues into something more. Right now, prices on his autos all all over the place but you can find his autos in bulk and some of those 2014 autos are often under $10.

You’d expect that to change if he turns out to be a 30-homer guy this season.