One of the hottest rookies in baseball — the King of the West Coast to counter Aaron Judge‘s Big Apple dominance — wrote his way into the record books on Monday night.

What makes this feat extra-enticing for collectors? The fact that Bellinger has a relatively minuscule amount of cardboard overall and a small number of certified autographs — and that means more competition for what he does have as the home runs go flying. 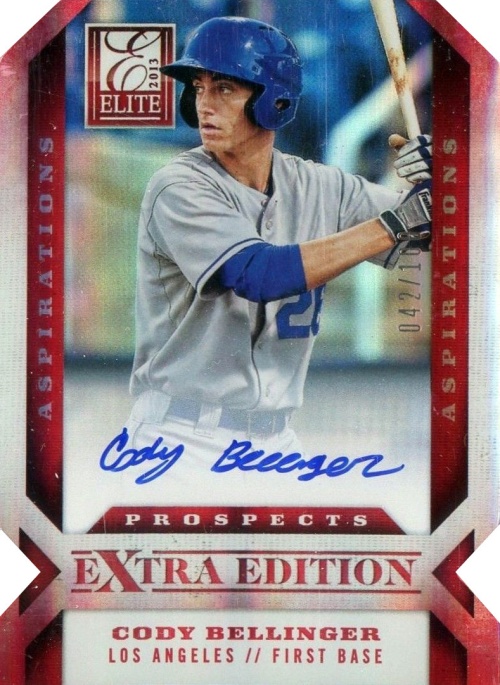 Bellinger’s first baseball cards arrived back in 2013 and since then he’s appeared on fewer than 200 in all that time since. He’s got fewer than 40 different certified autographs and fewer than 15 memorabilia cards. His first Rookie Card? It’s still to come this season — for Topps flagship, he’s likely the key to 2017 Topps Update.

If you need a Bellinger auto, there are only a handful of places to check — and that’s ballooning the prices being paid for them. His earliest are in 2013 Elite Extra Edition where his standard auto is limited to only 673 copies along with eight parallels. After that, he appeared in 2015 Bowman Chrome. His only autos this year are in 2017 Panini Diamond Kings, 2017 Donruss and his Topps Now cards that were sold with ink late last month. (Update: He’s also got a small number of Topps Now autos released today noting his hot start.)

Asking prices for his Bowman Chrome autos are quite bold over on eBay, while completed sales include a $10,500 sale of a graded Red and many, many others of note. Graded copies of his standard Chrome auto have topped the $1,000 mark with a 9.5 selling for $800 earlier today on the site and raw copies going for $500. His Elite auto also is commanding some decent cash with it pushing the $200 mark and even higher for parallels. (And those memorabilia cards? Check out Diamond Kings and Donruss for your only chances there — a sampling of just some of those cards are in a small gallery below.)

When it comes to players this hot, unsigned cards also move pretty well but we’ll save that unsigned focus for when his RCs arrive and make the comparisons then. Right now, the autographs are commanding all of the attention — and it will be interesting to see how they look if the forthcoming All-Star Home Run Derby include teams with Bellinger and Judge on them.

Look out if that happens …