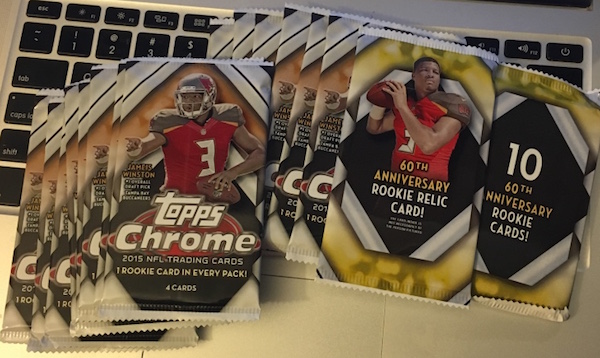 What’s Buzz-worthy: These boxes were initially made for retail and to capitalize upon a rookie crop that’s still stacking up as pretty decent a couple years later. This particular box wasn’t all that flashy with its key cards but there’s a good amount of Chrome cardboard here along with a guaranteed hit. The rookies here include Marcus Mariota, Amari Cooper, Jameis Winston, Todd Gurley, Tyler Lockett and there is a full rainbow of parallels for the 60th Anniversary Rookie Relics along with plenty possible in the standard packs. This one isn’t my favorite year for Chrome designs, but there’s no doubting the powerful place that the brand has had for football fans. This is a chance to revisit that in a fun but affordable way.

Product Grade: A
Box Grade: B
Fun Grade: A-