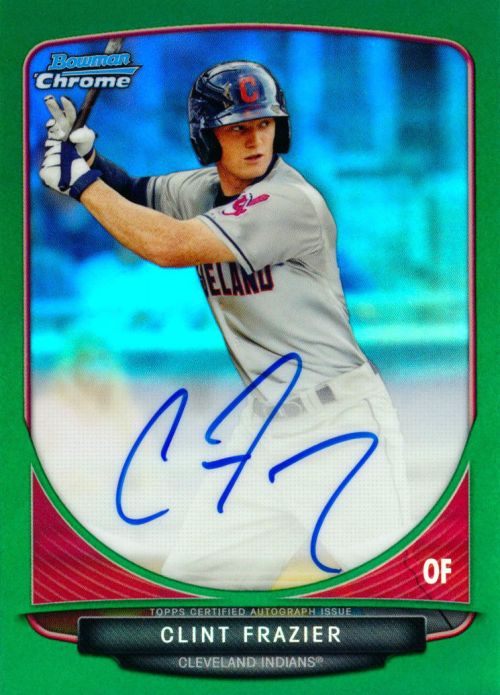 The New York Yankees’ newest rookie outfielder, Clint Frazier, made his big-league debut on Saturday night in big fashion with a home run and a double as part of a 2-for-4 day in Houston.

And just like Judge, who homered in his first game but had the night off save for a pinch-hitting appearance late in the Yanks’ 7-6 loss last night, it’s back in 2013 where you’ll find the start of his certified autograph résumé. 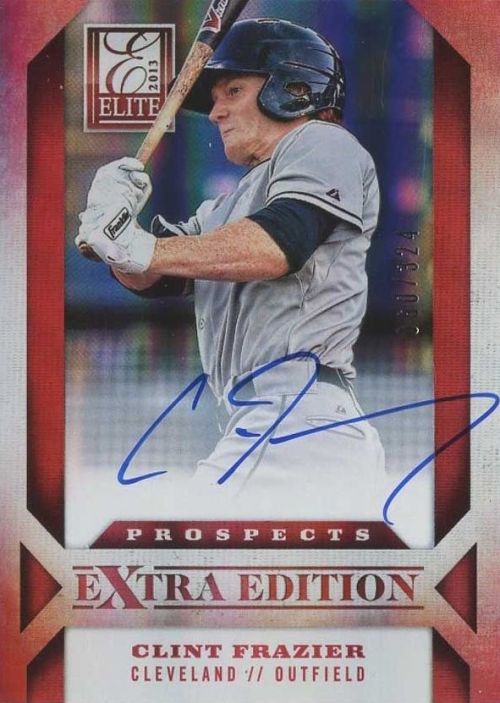 Frazier, who was drafted fifth overall in the 2013 MLB Draft by the Indians, appears on nearly 300 different autograph cards since that time. He came to the Yankees as part of the Andrew Miller trade last year, so he’s got very little Yankees cardboard right now — that makes his Topps Now card coming later today even more important … especially if Topps can add some ink. (It would be his first fully licensed Yankees autograph.)

Update: Those autos are here … check the gallery above.

That heavy presence in those first two seasons of cardboard has been followed up by appearances in every year since but in lower volume. His only 2015 autographs include Bowman Chrome and Panini Prizm, while his 2016 ink includes appearances in Elite Extra Edition, Immaculate Collection and National Treasures.

His only autos this year — ones with a New York focus but not the pinstripes — include 2017 Donruss and Topps Pro Debut. That’s it … for now.

There are more than 400 different Frazier autograph auctions active on eBay right now and action over on completed sales has shown some volume and dollar increases on high-grade rarities. Compared to other Yankees rookies of the last couple of seasons, there seems to still be room for growth — and part of that depends on what happens for the second game of Frazier’s career, which should be tonight in Houston, and then beyond.