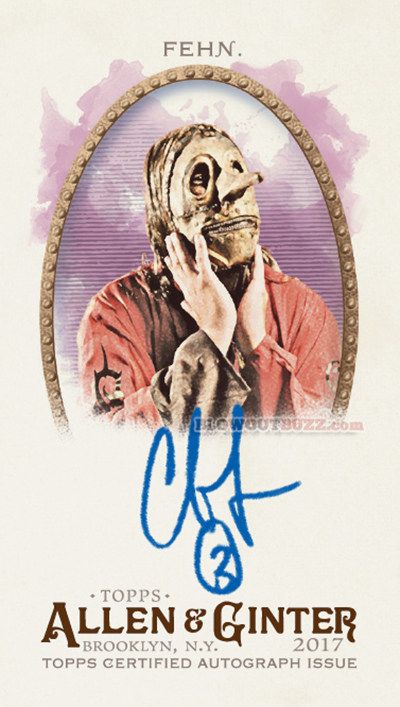 He’s traveled the world a few times over, been on the cover of Rolling Stone, won a grammy and helped sell millions of albums in the last 20 years, but there’s just something different about appearing on a Topps baseball card.

And that’s something that Slipknot‘s Chris Fehn, aka No. 3, can add to his accomplishments beginning Wednesday with the arrival of 2017 Topps Allen & Ginter.

“It’s crazy,” Fehn said. “It’s one of the coolest things that’s ever happened to me. Being a collector since I was a kid and then now to have something from that company of my own … it’s amazing.” 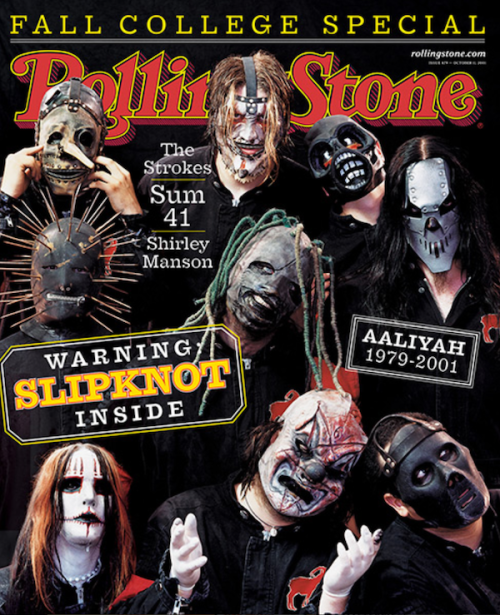 Fehn, one of the band’s percussionists since its debut album, Slipknot, arrived in 1999, has been a fan of baseball his entire life — and he’s a collector, too. In recent years he and other band members have been known to visit card companies and card shops while out on tour.

“It was always a treat to get just a pack of baseball cards when we were growing up,” said Fehn, who is from Iowa. “We didn’t want candy — we wanted cards. That part of my card collection [back then] is pretty bumpy, but it’s always been a part of my life.

“I wish [this card] was for baseball, but unfortunately guys of my caliber don’t make it to MLB,” he said, laughing. “I played college football. I played baseball my whole life. I was good, but you know… ”

Allen & Ginter is a modern-day take on the late-1800s tobacco cards of the same name that included “world’s champions” in sports beyond baseball in a time when cards were primarily just cardboard to help stiffen the packs of cigarettes. Over time they became advertising options for tobacco companies and something people collected as they included country’s flags, animals, sports stars and many other unusual things. Topps’ version of the brand, which began back in 2006, has grown to include pop culture personalities alongside stars from the sports world as well as some of the biggest surprises in collecting but with modern-day touches such as autographs.

How did his appearance come about? In part with a tour stop in Denver, Colo., and a visit with Michael Fruitman, owner of Mike’s Stadium Sportscards.

“It’s not like that good of a good story or anything — it’s just a friend that owns a card shop — someone who knew someone basically,” Fehn said. “We played a show there. He does security and has his baseball card shop, so that’s how I first met him. He does some fun breaks and stuff and I always try to get in them and help the local shops.”

Fruitman had a little more rock n’ roll in his version of the story.

“I was managing the floor at the Skipknot show in Denver last year when a mutual friend said Chris wanted to meet me,” Fruitman said. “One minute later, I’m by the tour buses introducing myself and talking cards with a member of one of the Top 10 heavy-metal bands of all time. I knew he had done some breaks with Beckett, but can’t exactly walk up to every performer, introduce myself and chat them up about sports cards.”

Fruitman knows about unusual cards in Ginter. Remember the “Balloon Boy” from a few years ago? He bought the balloon and long-time collectors probably know the Ginter tie-in. 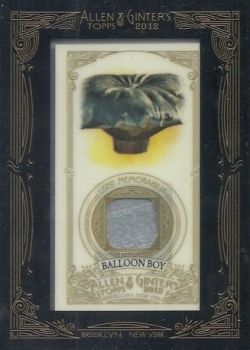 “I was impressed that [Fehn] knew his stuff about products and saw his passion for the hobby,” Fruitman said. “I think I joked with Chris about getting him into Ginter since a few years back I had gotten actor/musician Henry Rollins and also swatches from the Balloon Boy craft into the set. When I contacted my Topps buddy, he was not initially sure, but when I shared that Chris had true love for the hobby and since so many of Slipknot’s videos on YouTube.com had over 100-million views, I was able to persuade him that Chris was a perfect fit.

“By the time Chris called me Monday night to line up some product, I had a verbal go on him being part of the set and it was cool to hear how excited he was,” Fruitman said. “Sure I caught a boot to the head that night in the pit, and my neck stung for a few weeks, but it was more than worth it to me.”

Fehn won’t be a super-easy find in packs of Allen & Ginter as it appears that his autographed cards are the only thing appearing on the final checklist — at least that we know of so far.

“It was such an honor to be a part of this,” he said, “so when I got to actually do the signing and someone came to my house with everything in compartments and certain pens — now I know what players go through when I buy a Bowman Chrome and see that autograph.”

But some of those young players sign a few thousand cards at a time, though — that’s not what Fehn had to experience. He replied that he still knows what that’s like.

Sometimes players just end up signing symbols because of the volume — also something he had some thoughts on … as a collector.

“[That] is unfortunate because it’s nice to [get a good autograph]. A good example is Reggie Jackson — his signature is great. It’s a proper signature. Like Ted Williams — all those guys, all those are really cool. Now, you’re right, sometimes it’s like a ‘blurrrpp.'”

In the case of his autographs in Ginter, this is his standard sig appearing on his baseball card.

“It’s my quote-unquote Slipknot signature,” he said, “so my name and number.”

Others in and around the band — Shawn Crahan, aka Clown or No. 6, and Bobby Tongs, who helps document things along the way as a photographer and more while on tour — collect cards, too, but Fehn said he hasn’t caught up with them since this news dropped. 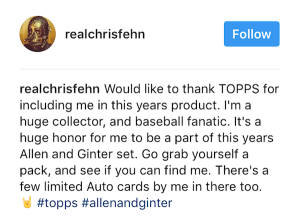 “I haven’t heard from anybody yet,” he said. “We’ve been apart, but I posted about it on Instagram.”

Meanwhile, he was so excited about the signing that he didn’t even take the time to document it or show off his card to his 231,000-plus followers.

“I just wanted to get it done — it was such a thrilling experience,” he said. “I should have had somebody film it, you know.”

Now, though, he’ll get a look at it just like other collectors — when his cards are found in packs alongside sports stars such as Floyd Mayweather or Kris Bryant.

“That’s crazy. I never really thought about that until you brought it up just now,” he said. “It’s such an honor — I really do love baseball, it’s the greatest sport. It’s a total honor to think that my card would be sitting beside Kris Bryant or Mike Trout or Alex Reyes or any of these guys.”