What’s buzz-worthy: The stars of the college game are back once again in a product that’s reconfigured to include an autograph in every pack as Panini America tips off the 2017-18 card season with this release — one that does include some NBA visuals, too. 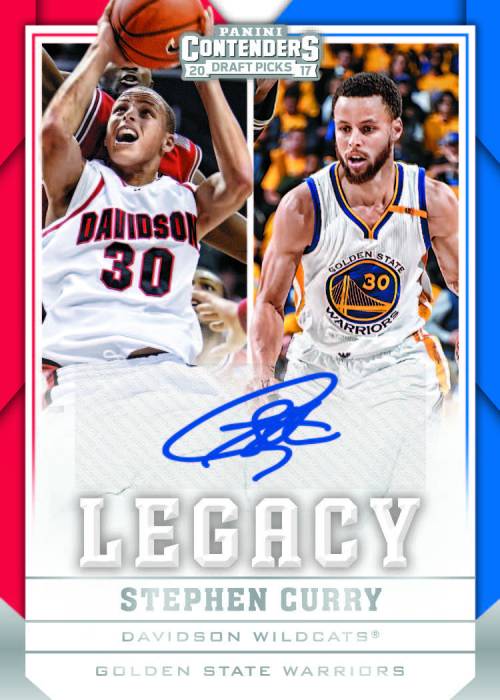 The Basics: This third release of college Contenders will include one parallels, 35 base cards, 35 variations and 30 inserts per box. Packs will be 18 cards this time around. As always there will be Draft Tickets (/99), Playoff Tickets (/15), Championship Tickets (/1), Cracked Ice Tickets (/23) and printing plates. New will be Rookie Photo Shoot College Tickets (on-card autos) and variations. Also new will be Legacy and Legacy Signatures that will show college greats in their NBA years. … New parallels will include Diamond Ticket, Building Blocks Ticket and Fame Tickets, which will be limited to 15, 10 and five copies per card. … Other details here? Cracked Ice parallels of International Tickets will be limited to 23 copies. There also will be printing plates. Turning Pro Signatures will have autos for stars spotlighting their pro and college days, while Collegiate Connections Signatures will pair teammates. … The base set will include 50 cards while the College Tickets will have 45 cards. … Packs carry a suggested retail price of $20.